I stepped out of the wooden outhouse, exhaled and gingerly closed the door. The inside of the door is plastered with cartoons about bears. Comic strips clipped from newspapers depicting bears and garbage, bear safety, bears and habitat – all things “bears.” This is appropriate for an outhouse in the campground at McNeil River State Game Sanctuary in Southwest Alaska, one of the state's (if not the world's) premier bear viewing areas. It is a wild place with few amenities, where bears go about daily ...   McNeil River Bears ArticleContinued

As the coordinator of the Alaska Department of Fish and Game's Invasive Species Program, Piorkowski has monitored Atlantic salmon sightings in Alaskan waters for years. He's now taken it one step further, ...   Frigid Snorkeling ArticleContinued 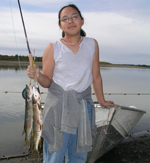 (Erik Anderson is an Aquatic Education Specialist for the Alaska Department of Fish & Game's Division of Sport Fish. One of the more enviable aspects of his job is traveling around Interior, Northern, and Western Alaska teaching about topics such as watersheds, plankton, aquatic invertebrates, and fish. Erik teaches students about the natural environment so that as stewards of Alaska, they will be responsible users of our valuable fish and wildlife resources.)

In early September, I was ...   Kuskokwim Kids Fish ArticleContinued

Bowhead whales and boreal owls are among the wide range of research projects proposed for the upcoming year through the Alaska Department of Fish and Game's Wildlife Diversity program. 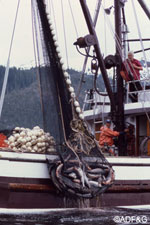 The Salmon Industry Restructuring Panel is charged with examining options, identifying research and information needs, and reviewing models on the range of alternatives for Alaska's commercial salmon fisheries. The panel is composed of harvesters, processors, hatchery operators, along with ...   Salmon industry ArticleContinued