Who knew that the great white shark’s smaller cousin routinely makes its home in Alaskan waters? We’re talking about the salmon shark (Lamna ditropis). The salmon shark ranges from the Bering Sea to the Sea of Japan and from the Gulf of Alaska south to Baja California. Believed to be the most endothermic of the lamnid sharks, which includes the great white, makos, and porbeagle sharks, salmon sharks can maintain their internal body temperature up to 21°C above ambient ...   Salmon Shark Tagging Article Continued

Sea turtles are a rare sight in Alaska waters, but on Aug. 5, 2020, a purse seiner just south of Prince of Wales Island came across a green sea turtle.

The crew was concerned that the turtle might become entangled in their seine net, so they brought it on board temporarily before releasing it unharmed. Fisherman Jes Boyd estimated the turtle weighed about 40 pounds. Green sea turtles can weigh 300-350 pounds, and this animal would still be considered a juvenile.

A new field guide for moose health in Alaska 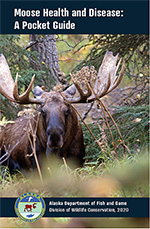 Fall is a greatly anticipated time of the year in Alaska for many reasons, and moose hunting season is one of them. The fall season is also a busy time for the Alaska Department of Fish and Game (ADF&G) Wildlife Health Program, as an influx of hunters in the field means more people out observing and interacting with wildlife. As a result, the ADF&G Wildlife Health Program receives a lot of calls and questions about moose flies, tapeworm cysts, and other common moose conditions.