Not many Alaskans are aware that we have two species of hare native to our state. Most Alaskans are familiar with the snowshoe hare and may enjoy hunting them throughout the state. However, residents of western and southwestern Alaska may also know about the Alaska hare (Lepus othus) aka arctic hare, tundra hare, or jack rabbit. The most distinguishing characteristic of the Alaska versus the snowshoe hare is their large size. They weigh between six and 12 pounds compared to the two-to-three ...   Alaska Hare Article Continued

Rockfishes are long-lived marine fishes that fertilize internally, versus egg laying fish that are fertilized externally. They are also considered matrotrophically viviparous. Wait…what’s that you say? Rockfish are magically delicious?? Well yes, that too-- adult rockfish are delicious, but what is meant by matrotrophy is that many rockfish species provide a form of maternal care during embryo development where additional nutrients or energy are transferred directly to the embryo ...   Rockfish Article Continued

Alaska is an amazing and unique place, with bountiful sea life, pristine shorelines, a diversity of landscapes and a culture connected to the land and its waters. Many people rely upon these fundamental qualities of Alaska to make their living and to sustain themselves. Fishing in Alaska is a fun activity and also a way of life.

In 2016 ADF&G recorded a total of 9,125 commercial fishermen that harvested their catch with 23,419 commercial crewmembers. According a study prepared ...   Commercial Fishing Article Continued 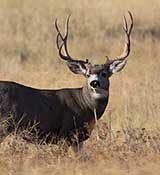 A mule deer carcass found in mid-May near the highway bridge over the Chena River Flood Control area is getting a close look by the Division of Wildlife Conservation.

“The deer was definitely killed in a vehicle collision and died very quickly,” said Wildlife Veterinarian Dr. Kimberlee Beckmen. “When it happened is difficult to pin down.”

Turns out, the question of timing could be important.