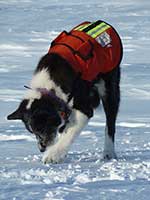 U.S. Fish and Wildlife Service biologist Craig Perham was sitting on his snowmachine taking notes when he was surprised by Karelian Bear Dog, “Kavik,” trotting resolutely by, heading up the nearby slope. Kavik’s owner, ADFG biologist Dick Shideler, had just unloaded him from the Hagglunds tracked vehicle and was preparing Kavik’s work vest when the dog pulled away and took off upwind toward the nearby ridge 300 meters away. 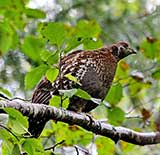 From late March through June, the males of these biggest of Alaska grouse fly ...   The Hooter Obsession Article Continued

We ask kids to hold one hand up and spread their fingers. We motion to the thumb and say, “Thumb rhymes with chum.” Then we ask them to use their pointer finger and point to their eye. “Point to your eye. Eye rhymes with sockeye.” ...   Alaska Salmon ID Article Continued