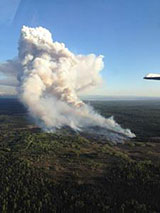 More than 500 people were engaged in fighting the fire during the last weeks in May, as it burned through the Kenai National Wildlife Refuge and threatened the communities of Kasilof, Funny River and Sterling. Conditions were ideal for the ...   Kenai Moose & Fire Article Continued

Hunters have about a six-week window to apply for big game drawing hunts in Alaska. The application period runs Nov. 1 through 5 pm Dec. 15. Hunters are encouraged to apply early - hunters who wait until the last few days can expect delays due to the high volume of traffic on the website.

The 2015-2016 Alaska Drawing Permit Hunt Supplement is available online and paper copies are available at ADF&G offices and most license vendors.