“Autumn is the mellower season, and what we lose in flowers we more than gain in fruits.”

As early as the first week of August the wild raspberries are already perfectly ripe in Southcentral Alaska. Locals find them hanging in red and purple clusters from stalks that bristle with fine, hair-like spines. They sweeten the air with a fragrance reminiscent of the hot pies we’ll pull later from the oven.

Wildlife veterinarian Marianne Lian is researching ways to make that process safer for animals and biologists, and spent most of the past year in Alaska focusing on a new drug combination ...   Better Drugs Article Continued

“They all came up to hunt, from four different states, and after they ...   Trichinosis Article Continued

Despite what many people in the Lower 48 believe, being outdoorsy doesn’t just run naturally through Alaskan blood. An honest appreciation for the miles of untamed wilderness spreading out across our state is something that has to be taught and cultivated by fellow sportsmen. Alaska’s legacy of outdoor recreation is the cornerstone of life and culture here in the Last Frontier. That is why the Alaska Department of Fish & Game, in conjunction with the Outdoor Heritage Foundation ...   Outdoor Youth Days Article Continued 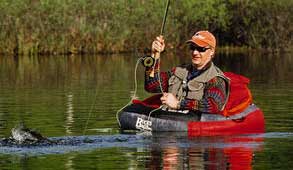 At Fish and Game, we really appreciate receiving photos from the public. Most often, these are from hunters and anglers, but wildlife viewers have provided beautiful images of bears, Dall’s sheep and other wildlife as well. Hunters know that we use reader-submitted photos in the hunting regulations, and often provide “trophy” shots. Quite often these are proud parents submitting photos of successful young hunters.

We also need pictures that depict the other aspects of ...   Photo submissions Article Continued

McNeil River falls roared just out of sight as we trudged closer, trying not to stumble on the slippery, muddy trail. Photographs we had seen of dozens of large brown bears fishing in this famous spot floated in our imaginations. Then we were there. Scenic whitewater cascaded over boulders and down the river. But, there were no bears. Not a single one.

Samantha McNearny (Sam), our guide, had warned us. Bears at the falls are after salmon and we happened to be there, in mid-August, between ...   McNeil Bears Article Continued