Hagelin, a biologist with Alaska’s Wildlife Diversity Program, is looking at olive-sided flycatchers, birds that spend summers in the state, mating, nesting and raising their young. These aren’t strictly Alaska birds – they are known to migrate as far south as Bolivia in the winter. The olive-sided flycatcher is considered “Near Threatened” globally, and declines are greatest ...   Tracking Flycatchers Article Continued

Our purpose was to collect DNA samples from ...   Salmon secrets Article Continued

Roy is retiring after nearly 20 years of outstanding service to the Northern Norton Sound Fish and Game Advisory Committee and other boards and committees that advise on subsistence issues. Advisory committees are the local "grass roots" groups that meet to discuss fishing and wildlife issues and to provide recommendations. There are 82 committees throughout the state each with expertise ...   Roy Ashenfelter Article Continued 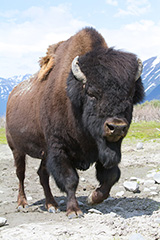 Like muskox, wood bison lived in Alaska until people hunted them out in the late 1800s. These large cousins to the familiar plains bison are well adapted for life in the north, and a few wild herds still exist in ...   Wood bison Article Continued

The idea arose November 2012 while division staff was attending Pacific Marine Expo in Seattle. The 8-foot replica boat was built by Armstrong Marine and on display at their booth. Crowds of Expo ...   F/V Sustainability Article Continued