Yet even in its early phases the work he shares with a collaborative staff of wildlife research, management biologists and education staff is intriguing. Last summer, Farley and a team of biologists captured a half-dozen bears – four black and two brown bears – in and ...   Camera collar bears Article Continued

By Mary Schwenzfeier and Gretchen Bishop

Golden king crab Lithodes aequispinus are a deepwater relative of the better known red king crab Paralithodes camtschaticus. Their most important commercial fishing grounds are in the Aleutian Islands, with smaller fisheries in Southeast Alaska and the Bering Sea. Aleutian Islands golden king crab fetched $3 to $4 per pound and produced a whopping harvest of 6 million pounds during the 2010 season. 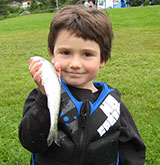 As the cold dark days of winter give way to the warmer longer days of spring, residents of Southeast Alaska start to dust of their fishing gear in preparation for the upcoming fishing season. For many young anglers their fishing season or a life time of fishing begins with a kids fishing day event. These events have become important community traditions made possible by strong collaborative partnerships between civic organizations, state agencies and federal agencies. The dedication and ...   Kids Fishing Days Article Continued

Gotcha! The camera takes three quick pictures as a mysterious visitor passes. The images are stored on a memory card in the trail camera - on loan from the Anchorage Fish and Game office.

The camera was set by students at Trailside Elementary School in Anchorage in a natural area near the school. Their curiosity piqued by tracks in the snow, they hoped the camera could answer some questions: “Who was here! Why were they here? Where were they going? Are they still here?”