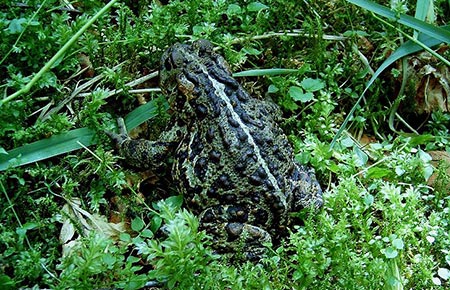 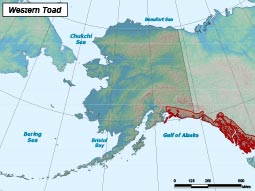 The western toad is a large, chunky, short-legged, warty amphibian with dominant parotoid glands at the back of the head and a conspicuous light-colored stripe running down the middle of the back. Coloration varies from brown, green to gray above and white with dark mottling below. Females are usually larger, more blotched, and have rougher skin than males. They range from 5.6 to 13 cm in length.

The western toad's breeding period is variable depending on the location but it generally occurs late April to July in Alaska. Mating takes place during daylight hours. Female frogs communally deposit an average of about 12,000 eggs per clutch, in two strands which they attach to vegetation in the water, usually near the shore. Larvae metamorphose in their first summer, and males and females are sexually mature by around two and four years, respectively.

Metamorphosed individuals feed on various small terrestrial invertebrates, primarily insects. Larvae filter suspended plant material or feed on bottom detritus. Toads will wait for prey on the ground surface or in burrows dug by other animals.

The western toad migrates between aquatic breeding and terrestrial nonbreeding habitats. Outside the breeding season, movements and home range locations of adult toads range from 400 to at least 1,600 m from breeding ponds.

Western toads may spend up to seven months of the year in hibernation during cold months. Chosen hibernacula are usually natural chambers or burrows in forested cover below the frostline. These are usually located adjacent to streams with constantly flowing water which help maintain above freezing temperatures.

This species has the widest distribution of all amphibians in Southeast Alaska. They are found in coastal rainforests on the mainland and islands throughout Southeast Alaska, northward along Gulf Coast to Prince William Sound (PWS). In PWS, toads have been documented on Montague and Hawkins islands, on the mainland as far west as the Columbia Glacier and as far north as the Tasnuna River, a tributary of the Copper River.

Western toads have a broad range of habitat use, and can be found from sea level to high mountain elevations usually in open, non-forested areas near water. Primarily terrestrial, they enter water to breed in a variety of ponds, lakes, streams, backwaters, ephemeral and sometimes brackish pools.

Overall population size is unknown. The western toad was formerly considered abundant and widespread in Southeast Alaska. More recently, however, long-time residents of Haines to Ketchikan have noted sharp declines.

Possible threats included fungal and bacterial infections, such as the chytrid fungus Batrachochytrium dendrobatidis, which affects adults, and the pathogenic fungus Saprolegnia ferax, which attacks eggs and may be introduced during fish stocking. Although no evidence for infected toads have been noted in Alaska, studies suggest the chytrid fungus as a possible cause for widespread declines in Southeast Alaska. Timing of the toad decline in Southeast has paralleled a major die-off observed in Colorado due to the chytrid fungus. There are two reports of presumed dipteran parasitism on western toad in Southeast Alaska, one during 1980's, and more recently during summer 2003. It was observed that prolonged dry weather in Southeast Alaska, during in April and May 2003, led to pond dewatering that delayed or prevented toads from spawning in some ponds. Also, recently warming winters and associated shallower snow depth may be causing problems for toads which are not as tolerant to freezing conditions during dormancy as the wood frog Rana sylvatica. Habitat destruction and degradation, due to development and postglacial rebound has significantly reduced historical habitat in the Mendenhall Valley, Juneau area.

In Alaska, amphibians are managed by Alaska Department of Fish and Game under statute 16.05.030, in which amphibians are legally included in the definition of “fish”. This statute makes it illegal for anyone to “hold, transport or release” any native amphibians without a valid permit. Habitat protected in wilderness areas such as Stikine-Leconte and Baranof Wilderness areas of the Tongass National Forest. Habitat also protected where species occurs in Glacier Bay and Wrangell-St. Elias National Park and Preserves and Klondike Gold Rush and Sitka National Historic Parks.