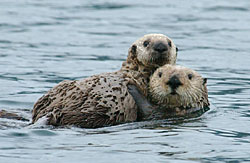 Aquatic members of the weasel family, sea otters are playful creatures that like to romp and tumble with each other. They are often spotted on the water surface floating on their backs. Sea otters are often found in loose-knit groups called rafts. They may also be solitary. They sleep on their backs in rafts, often side-by-side and wrapped in strands of kelp that provide anchorage.

Sea otters are marine mammals and only occasionally come ashore. Adult males weigh 80 to 100 lbs (36 to 44 kgs) and reach 5 feet (1.5 m) in length. Females are about a third smaller.

Sea otters eat almost any shellfish they can catch and will dive as deep as 250 feet when foraging. Tool-users, they sometimes lug rocks to the surface to use as anvils on which to bash and break shellfish. To generate body heat in their cold environment, sea otters consume the equivalent of about 20 percent of their body weight every day. Because they have such voracious appetites, sea otters have a profound effect on their environment, significantly reducing the numbers of prey animals, such as sea urchins, in an area.

Sea otters have no blubber for insulation. Instead they rely on air trapped in their dense underfur to insulate them in their cold water environment. They are often seen grooming and can become hypothermic if their coats become oiled. Their luxurious fur was much prized by Russian, American, and British fur traders; and sea otters were virtually wiped out of Alaska and along the Pacific Coast in the late 1700s and early 1800s. By 1850 just a few isolated groups remained, mostly in the Aleutian Islands. With protection from hunting and intact habitat, however, their population rebounded resulting in a fairly stable population in Prince William Sound by the year 2000. However, populations in the Aleutians and along the Alaska Peninsula saw a sharp decline in the 1990s, where predation by killer whales has been observed.

Sea otters live in shallow water areas along the shores of the North Pacific. Most of the sea otter habitat in Alaska has now been repopulated although populations in Southwest declined sharply in the 1990s.

Sea otters usually swim or float on their backs while grooming, resting, or eating. They seldom swim on their stomachs, except just before they dive. Sea otters tend to be lighter in color than the smaller land otters. Look for the round head, significantly smaller than a seal’s with a triangular nose.