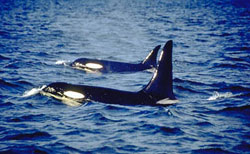 The killer whale (Orcinus orca) is the largest member of the dolphin family and lives in small groups called "pods," which are usually made up of family members ranging from juveniles (called calves) to adult males (called bulls). The orca was first known as the "whale killer" because they were observed killing and eating whales.

Like other dolphins and porpoises, killer whales are capable of navigating and hunting underwater in complete darkness using sound and echolocation, much like sonar. They emit a series of clicking sounds, which they direct forward in a focused beam, then listen for the echoes of their sounds bouncing off nearby objects. They can judge the size, distance, and speed of swimming prey through this technique.

Killer whales in Alaska are either residents or transients. These groups are genetically different and have distinct foraging and social behaviors and vocalizations.

Resident killer whales feed on fish, primarily salmon. They are very vocal and have sophisticated calls. Resident pods are more stable than transient pods. They often number more than 10 animals and can be as large as 50 animals.

Transients feed on marine mammals, like sea lions. Because marine mammals can hear echolocation sounds and whale vocalizations, transient killer whales tend to be very quiet and usually vocalize only after making a kill. Transients live in small dynamic pods of three to seven animals.

Killer whales are found in all the world's oceans. In Alaska, they occur most commonly over the waters of the continental shelf from Southeast Alaska through the Aleutian Islands and northward into the Chukchi and Beaufort seas. They migrate northward throughout the Bering Strait in the spring as the pack ice retreats and leave the Beaufort and Chukchi seas in fall when the ice advances.

Killer whales are 25 to 30 feet in length. They often cruise at the surface, spouting every few seconds as they swim. The black back, white eye patch, and striking triangular dorsal fin (in the center of the whale's back) are characteristics of the killer whale. Adult males' dorsal fins - dramatic triangles that can be six feet tall - are much larger than those of adult females. To identify whales, biologists use identifying characteristics - size, shape, and distinctive scars or marks - of the dorsal fin and the gray "saddle patch" on the back behind the dorsal fin.