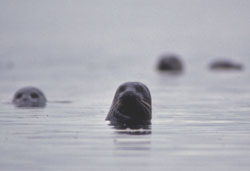 Harbor seals (Phoca vitulina), also known as common or hair seals, are mammals, that is they have hair and are air-breathing animals which suckle their young. They are well adapted to life in the sea, able to dive to depths of up to 1,649 feet (500m), and remain submerged for over 20 minutes.

Visitors from coastal cities across the Northern Hemisphere will recognize them from their distinctive round heads, big eyes and spotted grey coats.

Harbor seals feed on fish, clams, mussels, and crustaceans like shrimp. They are hunted and preyed upon by sharks and transient killer whales. In May and June, they tend to move to sheltered waterways where each female gives birth to a single pup, often on an iceberg. Harbor seals favor nearshore water and will also swim up rivers. 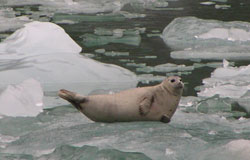 Harbor seals are widespread in both the north Atlantic and Pacific oceans and are found in Alaska along the coast extending from Dixon Entrance north to Kuskokwim Bay and west throughout the Aleutian Islands. They are most often spotted when their round heads pop quietly above the water surface. Curious but cautious, they are very quiet and rarely vocalize. They tend to swim solo, but concentrations of food can draw them together and they often haul out in groups. Ungainly on land, they look like fat sausages when at rest.