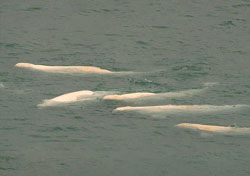 Belugas are white (as adults), medium-sized (about 12 ft in length) toothed whales that tend to travel in groups. They are somewhat more robust-bodied than their relatives, porpoises and dolphins, due to the presence of a blubber layer, which can be as much as 5 inches (12 cm) thick. The dorsal fin, characteristic of most whales, is reduced to a low ridge along the midline of the back. The head, which is characterized by a small “beak” and large bulging “melon,” is quite mobile in comparison to other whales. In fact, the beluga is the only whale that can bend its neck. These features appear to be adaptations to maneuvering and catching prey in muddy or ice-covered areas.

Known as “sea canaries” due to their extensive repertoire of whistles, grunts and clicks, belugas are also adept at using echolocation, or sonar, to navigate under the ice, find prey in murky waters, and communicate across watery distances.

Bering Sea belugas travel more than 1,500 miles to spend their summers in Eastern Canada. Some belugas also travel up rivers to feast on migrating fish.

Belugas occur throughout arctic and subarctic waters of North America, Greenland, Europe, and Asia. Five populations are thought to occur in Alaska: Cook Inlet, Bristol Bay, Bering Sea, Eastern Chukchi, and Beaufort Sea stocks. Although there are no physical barriers between these populations, genetic data indicate that the populations do not interbreed. The smallest and most genetically distinct population occurs in Cook Inlet, a population that was designated as depleted in 2000 under the Marine Mammal Protection Act.

Belugas are often seen south of Anchorage along Turnagain Arm from mid-July through August when salmon are running. They may be seen from shore near Nome on the Seward Peninsula as they follow the tomcod migration down the coast in fall. Look for the white finless back breaking the surface and the small spray from their blowhole as they breathe. Belugas often swim near shore in late fall.