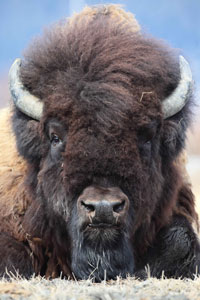 The “threatened” status of the wood bison under the ESA complicated efforts to re-introduce this species into Alaska. In the past, landowners were unwilling to allow a threatened species on their land due to potential ESA restrictions on resource development. The State cooperated with the USFWS to develop a special rule under Section 10(J) of ESA that designates wood bison in Alaska as a nonessential experimental population. It lists ADF&G as the lead agency managing wood bison, prevents the establishment of critical habitat, allows hunting and other forms of take necessary to manage a wood bison population, and mandates a management plan be developed by diverse interests. In effect, tThe special rule allows the State to manage wood bison on a sustainable basis, like other wildlife species in Alaska, and has allowed the restoration project to move forward. Support from local landowners in the Lower Innoko/Yukon River area has been strong and enthusiastic.