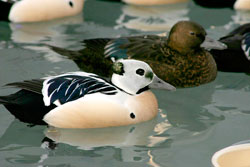 The sharp decline in Steller’s eider population and the near disappearance of this species from the Yukon-Kuskokwim Delta, once the most populated breeding ground in Alaska, stimulated the listing of Alaska-breeding Steller's eiders as a threatened species under the Endangered Species Act in 1997. Critical habitat for this species was designated in 2001.