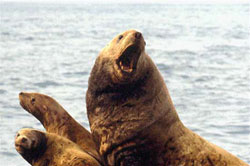 In addition to being listed under the ESA, Steller sea lions are a “strategic stock” under the Marine Mammal Protection Act and listed as depleted. NMFS has implemented rules that prevent entry in areas around rookeries. NMFS has also passed measures to reduce competition between Steller sea lions and commercial fisheries.