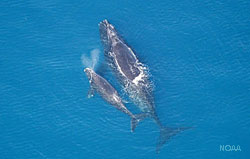 Two areas within the Gulf of Alaska and within the Bering Sea are designated as critical habitat for the North Pacific right whale (73 FR 19000 [PDF], April 8, 2008).