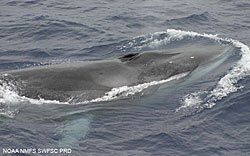 The fin whale population was decimated by commercial whaling in the 1800s and early 1900s. It was listed as endangered under the Endangered Species Conservation Act, the predecessor to the Endangered Species Act (ESA), in 1970. When the ESA was passed in 1973, the fin whale was listed as endangered throughout its range. It is also designated as depleted under the Marine Mammal Protection Act.