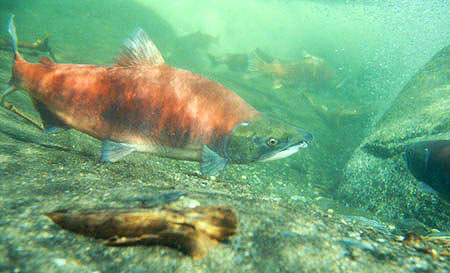 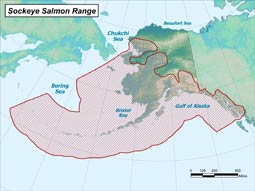 Sockeye salmon are the most economically important species of salmon in Alaska.

Sockeye salmon are one of the smaller species of Pacific salmon, measuring 18 to 31inches in length and weighing 4-15 pounds. Sea-going sockeye salmon have iridescent silver flanks, a white belly, and a metallic green-blue top, giving them their "blueback" name. Some fine black speckling may occur on the back, but large spots are absent. Sockeye salmon are prized for their firm, bright-orange flesh.

As sockeye salmon return upriver to their spawning grounds, their bodies turn brilliant red and their heads take on a greenish color, hence their other common name, “red” salmon. Breeding-age males develop a humped back and hooked jaws filled with tiny, visible teeth. Juveniles, while in fresh water, have dark, oval parr marks on their sides. These parr marks are short-less than the diameter of the eye-and rarely extend below the lateral line.

In Alaska, most sockeye salmon return to spawn in June and July in freshwater drainages that contain one or more lakes. Spawning itself usually occurs in rivers, streams, and upwelling areas along lake beaches. During this time 2,000 – 5,000 eggs are deposited in one or more “redds”, which the female digs with her tail over several days time. Males and females both die within a few weeks after spawning.

Eggs hatch during the winter, and the young “alevins” remain in the gravel, living off their yolk sacs. In the spring. they emerge from the gravel as “fry” and move to rearing areas. In systems with lakes, juveniles usually spend one to three years in fresh water, feeding on zooplankton and small crustaceans, before migrating to the ocean in the spring as “smolts”. However, in systems without lakes, many juveniles migrate to the ocean soon after emerging from the gravel.

Smolts weigh only a few ounces upon entering salt water, but they grow quickly during their 1-3 years in the ocean, feeding on plankton, insects, small crustaceans, and occasionally squid and small fish. Alaska sockeye salmon travel thousands of miles during this time, drifting in the counter-clockwise current of the Alaska Gyre in the Gulf of Alaska. Eventually they return to spawn in the same freshwater system where they were hatched.

The largest sockeye salmon populations are in the Kvichak, Naknek, Ugashik, Egegik, and Nushagak Rivers that flow into Alaska’s Bristol Bay, plus the Fraser River system in Canada. In good years, these runs can number in the tens of millions of fish.

Pacific salmon species on the west coast of the lower 48 United States have experienced dramatic declines in abundance during the past several decades as a result of several factors, including water diversions for agriculture and flood control; loss of habitat due to hydropower, resource extraction and development; and direct mortality from entrainment by hydropower projects. As a result, two lower-48 populations of sockeye salmon have been listed under the Endangered Species Act.

For the time being, salmon habitat in Alaska remains mostly pristine. There are hundreds of stocks of sockeye salmon throughout the state of Alaska and their population trends are diverse: Some stocks are in decline while others are at equilibrium or increasing. Potential future threats include habitat loss, habitat degradation, climate change, and over fishing.

The largest harvest of sockeye salmon in the world occurs in the Bristol Bay area of southwestern Alaska where 10 million to more than 30 million sockeye salmon may be caught each year during a short, intensive fishery lasting only a few weeks. Relatively large harvests of one million to six million sockeye salmon are also taken in Cook Inlet, Prince William Sound, and Chignik Lagoon. All commercial Pacific salmon fisheries in Alaska are under a limited entry system which restricts the number of vessels allowed to participate. Most sockeye salmon are harvested with gillnets either drifted from a vessel or set with one end on the shore, some are captured with purse seines, and a relatively small number are caught with troll gear in the southeastern portion of the state.

There is also a growing sport fishery for sockeye salmon throughout the state. Probably the best known sport fisheries with the greatest participation occur during the return of sockeye salmon to the Kenai River and one of its tributaries the Russian River on the Kenai Peninsula. Other popular areas include the Kasilof River on the Kenai Peninsula as well as the various river systems within Bristol Bay and Kodiak Island. Sockeye are highly prized by sport anglers for their tenacious fighting ability as well as food quality.

In the summer, there are many opportunities to view spawning sockeye salmon in the wild, providing a boon to Alaska’s growing tourism industry.

Research biologists and other specialists conduct applied research in close cooperation with the fishery managers. The purpose of the division’s research shop is to ensure that the management of Alaska’s fisheries resources is conducted in accordance with the sustained yield principle and that managers have the technical support they need to ensure that fisheries are managed according to sound scientific principles and utilizing the best available biological data.

A variety of research is conducted each year throughout the state that explores topics such has stock and harvest assessment, population dynamics, genetic stock identification, and stock assessment technologies. Such projects are often conducted in collaboration with university, federal and international institutions. The results of these works are peer-reviewed and presented as written articles as well as presented at scientific conferences and meetings throughout the world.