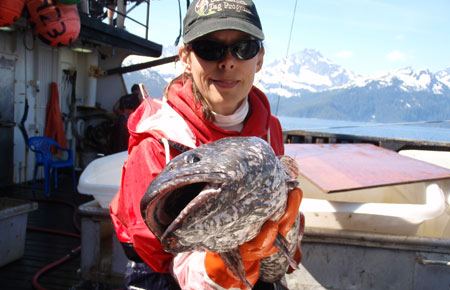 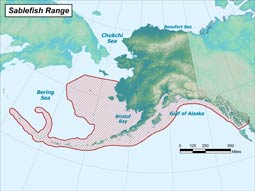 Sablefish (Anoplopoma fimbria), also known as black cod, are a groundfish species in the family Anoplopomatidae, which has only one other species, the skilfish (Erilepis zonifer). Sablefish are elongate in shape and are dark gray to black on their upper body with a lighter gray under side. They have two dorsal fins that are well separated which easily distinguish them from skilfish which have two dorsal fins close together. Sablefish have been recorded to reach sizes of 114 cm in length from nose to tip of the tail and a weight of up to 25 kg. An average sized sablefish from the 2010 Southeast Alaska state fisheries is 69.1 cm from nose to fork length and 3.7 kg.

Sablefish are a long-lived species with forty-year old fish commonly caught in the commercial fishery. Maturity is reached at around 5 to 7 years; once sablefish reach maturity they spawn annually. They lay 110 eggs per gram body weight, so an average sized sablefish of 3.7 kg will lay about 407,000 eggs. Spawning occurs in deep water (300–500 m) in winter or spring in Alaska, with precise timing dependent on spawning location. Locations of sablefish spawning aggregations in Alaska, and if they aggregate, are unknown.

Eggs develop at depth and larvae in surface waters. Pelagic juveniles drift inshore and remain there until they reach a size of 30 to 40 cm; around age 2 sablefish begin to move into deeper water. They settle into their adult habitat at 4 to 5 years of age, around the time they become mature and capable of reproduction.

Sablefish are opportunistic feeders, consuming a wide variety of organisms. Their diet varies dependent on life stage, geographic location, season, and year. Their diet consists of fish, cephalopods (squid and octopus), and crustaceans. Young of the year (yearling) sablefish have a diet that is mainly euphausidds.

Juvenile sablefish are eaten by a variety of species with adult Chinook and coho salmon as possibly their main predators. A major predator for adult sablefish is most likely sperm whales.

Federally managed sablefish found in the Bering Sea and in the Gulf of Alaska are considered one population with migration occurring between these regions. In the Gulf of Alaska, small sablefish move westward and large sablefish move eastward. Consequently, large year classes are first noticed in the westward areas. In Southeast Alaska, the Chatham and Clarence Strait fisheries are considered separate populations; however, tagging studies indicate some movement between Chatham Strait and outside waters and between Clarence Strait and British Colombian waters. The degree of migration between inside and outside waters has not been quantified.

Adult sablefish are considered to be a groundfish and are associated with the bottom. They occur in deep water, ranging from 150 to 1,500 m (82–820 fm), along the continental slope, in shelf gullies, or in fjords. Sablefish are caught in soft, hard, and mixed substrates; however, they are generally thought to be found in soft substrates. Juveniles tend to be pelagic or semi-pelagic, living in shallower, nearshore waters.

Sablefish abundances in Alaskan waters are relatively low compared to the peak abundances in the late 1980s; however, the sablefish population in federal waters is considered to be neither overfished nor approaching an overfished condition as of 2010. The Chatham Strait population is not considered to be overfished; however the status of other state managed fisheries is uncertain without full stock assessments.

The current stock assessment for sablefish in federal waters can be viewed at the website for the North Pacific Groundfish Assessments.

The U.S. federal longline and the Canadian trap and longline fisheries have been certified as sustainable by the Marine Stewardship Council.

The domestic sablefish fishery expanded in the early 1980’s. During this time an increase in population abundance occurred due to the exceptional recruitment in the late 1970’s. Catches then fell until 2000 after which there was a modest increase in abundance due to a strong 1997 year class. Since then there has been no evidence of strong recruitment in Alaskan waters.

The federal fishery and state fisheries of Clarence and Chatham Strait began as year round fisheries which shortened down to months and then days in some areas. As a consequence, quota share systems were set up for these fisheries in the 1990’s which increased the fishing season back to several months. In addition, the individual quota share system for federal waters increased catch rates and the spawning potential of sablefish by 9% due to the decrease of harvest of immature fish.

As of 2010, no sablefish aquaculture operations exist in the United States; however, sablefish farming has begun in nearby British Colombian waters. Sablefish farms which raise fish in ocean pens, raise concerns of possible negative impacts, such as disease, parasites, or genetic threats to wild stocks; habitat destruction of the environment; health risks to consumers; and economic impacts to the fishing industry.

Sablefish are a highly valuable commercial fish species with a price per pound even greater than halibut in recent years. The 2010 average dressed price per pound of sablefish was $5.96 for the state and federally managed fisheries in Southeast Alaska. Sablefish are often exported to Japan where it is an important seafood product, but it is also growing in popularity around the world and domestically as a delicacy. Sablefish have a very high fat content and are often smoked, but can also be prepared by baking or grilling.

In addition, sablefish may be growing in popularity as a sport fish target for both guided and unguided anglers. Sablefish are usually caught with electric reels due to the deep depths that they inhabitat. In 2009, daily and annual bag limits were established in Southeast Alaska with a 4 fish daily bag limit for both residents and nonresidents and an annual limit of 8 fish for nonresidents. As of 2010, no daily or annual bag limits existed for sport fish catch of sablefish in other regions.

Sablefish are also caught for personal use and subsistence using longline gear. However, as of 2010, only a small percentage of people use sablefish for subsistence as indicated by household surveys in Southeast Alaska. This is probably due to the deep depth sablefish are located.

Fisheries for sablefish in Alaska are both federally and state managed. The majority of sablefish fisheries in Alaska are limited entry and are managed through quota shares. Federal fisheries occur along the outer coast in the Gulf of Alaska, along the Aleutian Islands and in the Bering Sea with the majority of the harvest from the central Gulf and in Southeast. State managed fisheries for sablefish occur in Southeast Alaska, Prince William Sound, Cook Inlet, and in the Aleutian Islands.

Sablefish in federal waters are managed by regions in order to distribute exploitation. The acceptable biological catch (ABC) is apportioned between these regions and then allocated between gear types. A stock assessment is performed annually for the federal fishery using an age-structured model; this assessment is reviewed by the North Pacific Management Council.

At the time the Federal Government began the IFQ program, the State established two minor fisheries in Cook Inlet and the Aleutian Islands, so that open-access fisheries were available to fishermen that were not allowed to participate in the IFQ program. These fisheries are managed using a Guideline Harvest Level (GHL), which is determined based on harvest history, fishery performance, and the federal survey for the area.

Three major state fisheries exist which are limited entry and are located in Prince William Sound, Chatham, and Clarence Strait. The Prince William Sound sablefish fishery is managed using a GHL and derived from the estimated area of sablefish habitat and a yield-per-unit-area model. For Clarence and Chatham Strait fisheries an annual harvest objective is set with regard to survey and fishery catch per unit effort and biological characteristics of the population. In addition, in Chatham Strait an annual stock assessment is performed which includes a mark-recapture estimate of the population abundance.

The National Marine Fisheries Service (NMFS) and ADF&G conduct assessment surveys on sablefish in Alaskan waters. The NMFS conducts an annual longline survey and a triennial trawl survey in the Gulf of Alaska, and ADF&G performs annual longline surveys in Chatham and Clarence Strait. These surveys provide estimates of catch per unit effort, relative abundance, and biological data. In addition, tagging studies exist to study sablefish movement for federal, state, and Canadian waters. The ADF&G conducts an annual tagging survey in Chatham Strait as part of a mark-recapture study to estimate population abundance.

Further investigations into the migration of sablefish are being conducted in Alaska. The NMFS is working on a migration model that includes both federal and state waters. In addition, the ADF&G is conducting pilot studies to determine the feasibility of acoustic tagging of sablefish in Chatham Strait.