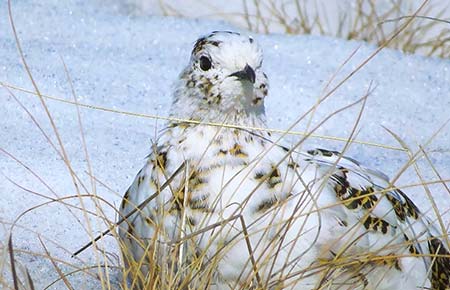 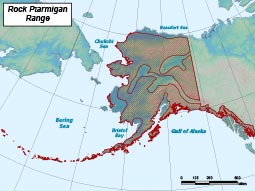 Unlike other grouse, some male rock ptarmigan help raise the young, defending them against predators.

Larger than white-tailed ptarmigan and smaller than willow ptarmigan, rock ptarmigan develop their winter plumage early in October in central and northern Alaska, and are still predominantly white until early to mid-June. Cocks have a black mask from bill to eye in winter, effectively contrasting with their bright red, fleshy eyebrow and white body plumage. Hens have no mask, but about one female in five has a partial black stripe fore and aft of the eye. As is the case in willow ptarmigan, both sexes have black tail feathers tipped with white. However, the rock ptarmigan’s much narrower bill and smaller body size clearly distinguishes it from the willow ptarmigan.

By early May, female rock ptarmigan begin to show their new, brown summer plumage. When the hens begin incubating their clutch late in May, they are completely brown except for their white wings. Males keep the winter plumage until early June, then molt quickly to the finely-barred, dark brown summer plumage. However, the subspecies of rock ptarmigan found in the Aleutian Islands are an exception. There, the males actually begin getting brown feathers (almost black feathers in the Near Islands) by late March before the female plumage change.

Driven by their reproductive urge, cocks become less and less tolerant of each other throughout March and April. In early spring, males stake claims to parcels of ground that they defend in good weather, but spring snowstorms will send these males back into flocks. By late April or early May, males establish permanent territories that they defend in fair weather or foul. Hens arrive on the breeding grounds a bit later than males and then select their mates and nesting areas (often the same ones used the previous year). Males usually remain monogamous within a breeding season. However, males can be found with two females. By late May the first eggs are laid often on the open tundra with only a little grass or herbaceous cover for visual protection. The cocks stay on their territories throughout June, although the intense strutting, tail-fanning and aerial chasing typical of the courtship period wanes after the hens begin to incubate their clutch. Clutch sizes average between six to twelve and hens incubate for about 21 days. Most Alaskan ptarmigan chicks hatch from mid to late June.

Nests of rock ptarmigan consist of a scratched-out depression that may be lined with moss, lichen, grass, and the female’s breast feathers. They are often located out on the open tundra with minimal vegetation to offer any protection. Eggs are laid at intervals of 24 to 30 hours with full clutches usually containing six to twelve eggs; the number in a clutch varies not only with the individual but from year to year as well. Incubation lasts from 20 to 22 days. Nests are used only once. Re-nesting (second attempts to nest made when the first nest is destroyed) does occur but is generally rare.

Chicks hatch late from mid to late June in most of the state. In warm weather the hen leads the chicks from the nest about 12 hours after they hatch. The young live off nutrients stored in their bodies for a day or two after hatching, while learning to peck at bits of food shown to them by their mothers. The phenomenal growth and development of young ptarmigan during the first month of life is proof that the chicks learn the lessons of food-gathering very well. They double or triple their weight in ten days, and develop a working set of flight feathers during that time.

Hens erratically lead their broods from one good location to another, usually staying within one-half mile of the nest. Chicks normally stay with their parent until late August, but in crowded brood-rearing areas some exchanges of chicks may take place.

Throughout September flocks of rock ptarmigan numbering from 20 to over 250 birds gather and move from place to place. At the end of this period, in which various local populations mix, flocks of mostly females move to their low-elevation wintering areas.

Winter flocks appear to be nomadic, wandering from place to place according to weather, snow conditions, food supply, and perhaps other impulses. Eating, avoiding predators, snow burrowing, and waiting out storms are daily winter activities. Rock ptarmigan can be seen eating, almost frantically, for much of the day, depending on day length. As days grow longer in February, it is not uncommon to find rock ptarmigan roosting or loafing for a portion of the midday. Rock ptarmigan must eat the equivalent in food of one-tenth to one-fifth of their body weight each day.

Rock ptarmigan occur throughout most of Alaska. They can be found from the northern Brooks Range south throughout Southeast Alaska. Rock ptarmigan are the only Alaskan ptarmigan species to occur on the Aleutian Islands.

Rock ptarmigan breed on hilly or mountainous tundra throughout Alaska. They appear to prefer very low herbaceous, and dwarf alpine plants are intermingled with rock and gravel ridges and alpine valley. The summer range of rock ptarmigan often abuts willow ptarmigan range, with rock ptarmigan breeding on higher, drier, rockier ground. In winter most male rock ptarmigan are at the lower edge of their breeding range. The hens move to the hills fringing large valleys, where they spend the winter in shrubby, open habitat.

Rock ptarmigan also live in Canada, Scandinavia, Scotland, and northern Eurasia. They range through most of Greenland and Iceland and have scattered southern outposts in Japan, Switzerland, and Spain. In Alaska, rock ptarmigan live in all major treeless areas except the flat tundras of the western and extreme northern coasts.

Like the other ptarmigan species, rock ptarmigan nests in mostly treeless areas.

Ptarmigan hunting can be a serious business, especially if you live in Alaska’s vast hinterland and caribou have been scarce. Then is the time to go after ptarmigan in earnest, using all the tricks at your command. Snares are very effective when used by those who know the birds well. A favorite method is to build a thin fence of close-set willow branches, leaving small openings where the snares are set. Another technique takes advantage of the fact that ptarmigan drag their feet in soft snow. A series of snare loops are tied into a long line, and the loops are placed flat on the ground around a favorite thicket of willows. Birds step into the loops, drag their feet forward — and are caught.

In general the small game hunting seasons are long (late summer through the winter) and the bag limits are very liberal. The current Alaska hunting regulations cover harvest limits, seasons, and general hunting restrictions. Regulations are available free at Fish and Game offices, most sporting goods stores, and online at the ADF&G website. Small game specific regulations are also available on this page.

Alaska is divided into 26 game management units, or GMUs. Find the unit where you plan to hunt. Alaska’s small game bag limits are generous compared to most states, but they differ between GMUs. Some units are divided into subunits, and within each, seasons and bag limits may vary. Generally there are very few locations throughout Alaska that have restrictions on small game hunting.

Within the Anchorage metro area (GMU 14C) regulations are generally more restrictive. Methods vary by location and a registration permit is required to hunt inside the Anchorage Coastal Wildlife Refuge and within a portion of the Eagle River Management Area. The permit for the Anchorage Coastal Wildlife Refuge is available online during the hunting season, or at the Anchorage ADF&G office. To register to hunt in the Eagle River Management Area, hunters must sign up at the Anchorage ADF&G office. Hunter education certification is required for both areas. Before venturing into the field in 14C be sure to review and understand the restrictions, bag limits and season dates for your desired hunting location found in the GMU 14C Small Game Summary below.