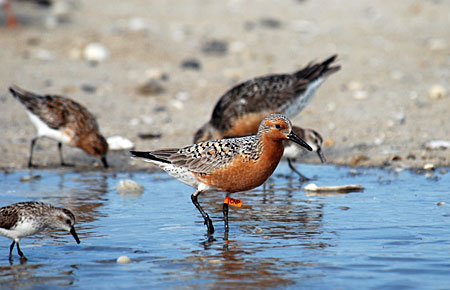 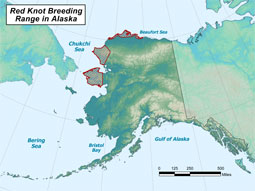 The red knot has one of the longest migrations in the animal kingdom.

The red knot is a medium-sized (9-11 inches in length) shorebird with black legs. It has a relatively small head and short neck with small dark eyes. Its black bill is about the same length as its head and has a thick base which tapers to a narrow tip. A red knot’s breeding plumage is very colorful. It has a red breast and a dark, russet back. Its winter plumage is a dull gray with white underside.

Red knots are monogamous and have one brood per year. Males arrive at the breeding grounds before the females and establish territories they will defend throughout the mating season. The males build 3-5 nests within their territory by removing the vegetation and creating scrapes in the ground. Pair formation occurs when the females arrive on the breeding grounds. In June or July, the female lays a clutch of four eggs. The eggs incubate 20-25 days with both parents tending the nest. The young can leave the nest soon after hatching. The female leaves the breeding grounds before the chicks fledge, and most of the parental care is provided by the male. Chicks learn to fly when they are approximately 18 days old.

Red knots feed by pecking or scratching at the sand or probing with their beaks. They eat mainly mollusks and insects. They will occasionally consume seeds or small fish.

Red knots migrate incredible distances between their arctic nesting grounds and their southern wintering grounds. They are known as “jump” migrants, undertaking long portions of the migration in a single flight. The northern migration generally occurs April-June. Red knots migrate southward from July-October. C. c. roselaari migrates to Alaska and Wrangel Island to breed then returns to wintering grounds in Florida, the Gulf of Mexico, the Caribbean, and northern South America.

There are two subspecies of red knot found in the United States. The subspecies found in Alaska is C. c. roselaari. A small population nests on the tundra in northern and northwestern Alaska. A larger population migrates through Alaska en route to their breeding grounds in Siberia.

There are over 1 million red knots worldwide. The C. c. roselaari population is small compared to other subspecies. In 2008 the U.S. Fish and Wildlife Service estimated the population of C. c. roselaari was less than 10,000 individuals.

Although populations of the C. c. rufa subspecies of red in the United States have declined dramatically in the last decade, little is known about the roselaari subspecies, and an accurate trend is not available.

Overharvest is a threat to the red knot in some portions of its range. Habitat degradation is another threat due to their tendency to congregate in large numbers prior to migrating.

Red knots are hunted in some parts of South America for food. They are also hunted for sport in Barbados.

The red knot is managed by the U.S. Fish and Wildlife Service and is protected under the Migratory Bird Treaty.