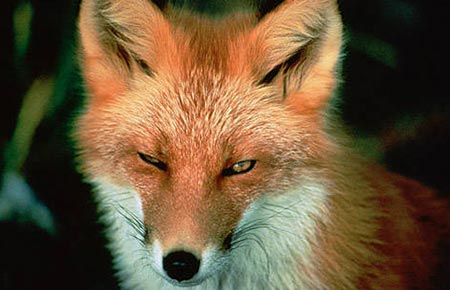 In tundra regions, where the ranges of the arctic and red foxes overlap, the red fox is dominant. In these areas, red foxes have been observed digging white (arctic) foxes from their dens and killing them.

Red foxes are members of the dog family Canidae, and their general appearance is similar to dogs, wolves, and coyotes. The European red fox is the same species as the American red fox. The red fox measures 22 to 32 inches (56–82 cm) in head and body length, and the tail is 14 inches to 16 inches (35–43 cm) long. The adult fox weigh from six to 15 pounds (2.7–6.8 kg), but it appears heavier than it actually is. The males, or “dogs,” are usually heavier than the females, or “vixens.”

The red fox is usually recognized by its reddish coat, its white-tipped tail, and black “stockings,” although the species does have many color variations. The outside of the ears may be black-tipped, while the inside is usually white. The white tip on the tail will distinguish this fox from other species, regardless of its color phase. Red is the most common color, but the hair may be from light yellowish to deep auburn red. Several color phases can occur in one litter. Red foxes displaying a distinct color pattern are referred by the name of that phase (i.e., red, cross, silver, black). The cross fox, for example, has a black/brown cross on the back and shoulders. The silver and black phases are similar. However, the black does not have the silver-tipped guard hairs characteristic of the silver fox. The occurrence of black-silver phase appears to increase toward the north and the northwest of Alaska. However, even where most abundant, it comprises less than two percent of the population.

Red foxes breed during February and March. Their breeding habits vary widely. They have been observed exhibiting monogamous breeding behavior, but males will also breed with multiple females.

The den is a hole in the earth, 15 to 20 feet long, usually located on the side of a knoll. It may have several entrances. Sometimes foxes dig their own dens. More often, though, they appropriate and enlarge the homesites of small burrowing animals, such as marmots. They also will use abandoned wolf dens. Conversely, wolves may enlarge and use a fox's den.

Within the den is a grass-lined nest where well-furred but blind babies, called pups, are born after a gestation of 51–54 days. A litter of four pups is common, though a litter of 10 is not a rarity. At birth, pups weigh about four ounces. Normally only one litter is born each year. The pups' eyes open eight to 10 days after birth. The young leave the den for the first time a month later. The mother gradually weans them, and by the time the pups are three months old, they are learning to hunt. Both parents care for the young. The family unit endures until autumn, when it breaks up and each animal is on its own.

The red fox is omnivorous. Although it might eat muskrats, squirrels, hares, birds, eggs, insects, vegetation, and carrion, voles seem to be its preferred food. Foxes cache excess food when the hunting is good. They return to these storage sites and have been observed digging up a cache, inspecting it, and reburying it in the same spot. Apparently, they want to be sure that their food is still there.

The red fox is common in most of northern North America. It is found throughout Alaska, except for some of the islands of Southeast Alaska and the western Aleutians and is rare in Prince William Sound. It is native to Kodiak Island but is an introduced animal on many islands in the state as a result of fox farming operations in the early 1900s. Red fox populations in Southeast Alaska are sparse, but the animal is found in the Taku and Stikine river valleys and the Mendenhall Flats. Red foxes have also been seen on Douglas Island near Juneau. The fox prefers broken country, extensive lowland marshes, and crisscrossed hills and draws. It is most abundant south of the arctic tundra. It is also present in tundra regions, which it shares with the Arctic fox. Where the ranges of the two species overlap, the red fox is dominant. In these areas, red foxes have been observed digging white (Arctic) foxes from their dens and killing them.

In areas where foxes have had little contact with humans, they display cautious curiosity. Even less fear is shown where contacts with humans are very common. Foxes are very adaptable to a wide range of habitats and can thrive close to humans, but they prefer wild settings. They require only a source of food and cover.

Population trend is unknown but population is large and abundant.

Fox trappers have always respected the cunning displayed by this intelligent animal. Only the most carefully planned sets, free of human scent, will consistently catch foxes. Fox fur, like many other furs, fluctuates widely in popularity. When fox is out of style, the prices are correspondingly low. During the 1920s, when fox fur was fashionable, silver fox pelts sold for up to $500 each. 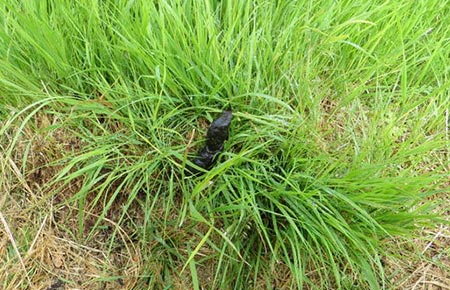 Red fox scat at Round Island