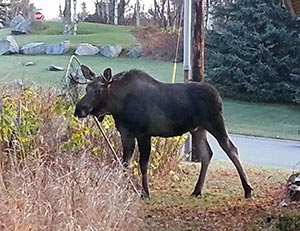 This young bull moose became entangled in a landing net in an Anchorage neighborhood. Alaskans who live in moose country should take precautions to guard against moose entanglements. ©ADF&G

Anchorage) — Done using your outdoor hammock for the season? When was the last time your kids actually went out to play on the backyard swing set? Moose have a way of getting tangled in things we leave draped, set up, or hanging outside, and items that can be put away until May — or at least when not in use — could save a moose from injury or death.

Earlier this month biologists were called to an Anchorage park to remove a young bull moose whose antlers were entangled in soccer goal netting. And last fall, a video went viral of Soldotna-based Wildlife Technician Larry Lewis who, with help from Samaritans, used a skiff in a local lake to catch a swimming bull moose whose antlers trailed long lengths of cable from an outdoor dog run.

"This type of entanglement is fairly common with bull moose," said Lewis, "particularly in the fall."

From September well into October, breeding season for moose, rutting bulls become especially active and aggressive. In urban settings, they may catch or thrash their antlers against wires, nets, cords and Christmas lights, which can lead to entanglements. Entangled moose sometimes asphyxiate, die from exhaustion, or injure themselves in efforts to get free.

"We had a bull two years back that got hung up in a tire swing, broke loose, and became exhausted dragging the tire around," said Tim Peltier, Palmer area wildlife biologist. "By the time we got to him it was already too late to help, and we had to put him down."

If reported, biologists may save entangled moose from death or suffering, but prevention is best.

"Consider moose when you set up Christmas lights, volleyball nets, dog runs — anything outdoors that could lead to an entanglement for moose," said Battle.

To report entangled moose, visit www.adfg.alaska.gov and click on the "Report a Wildlife Encounter" button on the upper right side of the page, or phone the department office nearest you. For more information, contact Dave Battle at david.battle@alaska.gov.