Resident and nonresident hunters who want to take a grizzly bear in the central part of Unit 26B north of the Brooks Range this year need a registration permit.

RB989 is currently available on the Department of Fish and Game’s website (https://secure.wildlife.alaska.gov/index.cfm?fuseaction=interperm.issue_permit_greeting). A detailed map of the hunt area is also available online.

Resident hunters are not required to purchase a $25 bear tag anywhere in Unit 26B.

The grizzly bear season in the rest of Unit 26B is open September 1-May 31, and no permits are needed by resident hunters. Nonresident hunters outside the registration hunt area are required to have a drawing permit DB987, a nonresident bear tag, and must be accompanied by a registered guide or a parent, child or sibling (or the spouse of that relative).

“Over the past three years hunters have taken about 22 bears per year from the unit,” said Area Biologist Beth Lenart.

This is the first year registration permits are required for the central portion of Unit 26B. The Board of Game eliminated a drawing permit requirement, extended the hunting season and established the registration permit hunt to increase the take of grizzly bears and reduce predation on muskox groups.

The North Slope muskox population has declined to approximately 200 animals, and grizzly bear predation has been identified as an important cause.

“We know bears are having a negative effect on the muskox population. We’d like to increase the bear harvest this year to prevent further decline in the herd,” said Lenart. 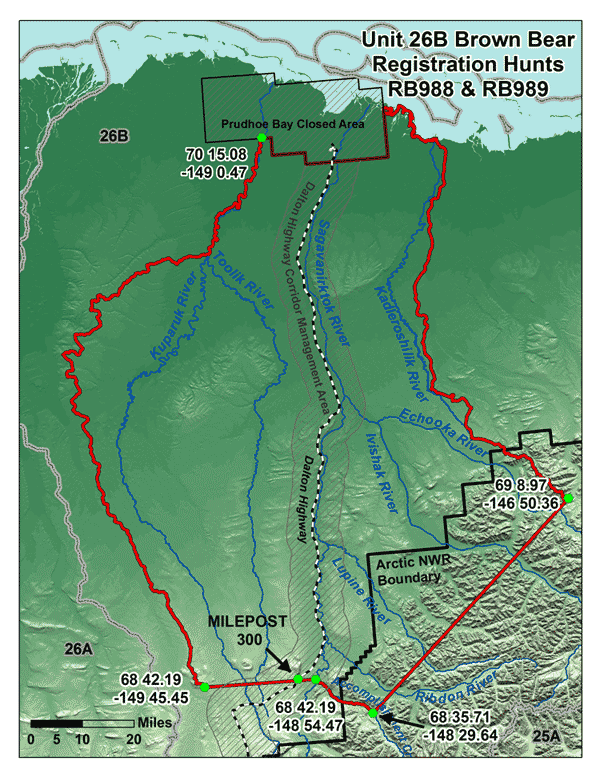