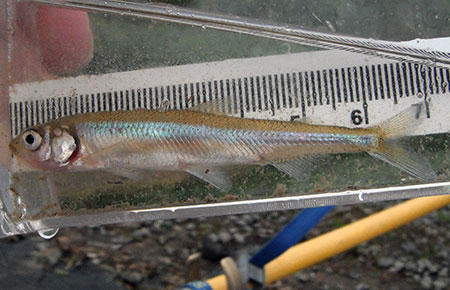 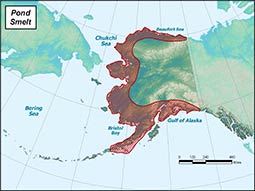 The pond smelt is a small fish up to 8 inches in total length. It is distinguished from other Alaska smelts by its small mouth, the two rows of minute, brush-like teeth on the vomer and palatines bones, and the number of mid-lateral scales, between 51 and 62. The adipose fin of the pond smelt is typically longer than the diameter of the eye which distinguishes it from surf smelt. The mouth of the pond smelt is equipped with moderately developed canine-like teeth, which are lost as the fish approaches maturity, so by spawning time it usually has no teeth at all.

Pond smelt are generally light brown to olive green above, with a metallic silver band along middle of sides. Ventral regions are silver shite in color with pale fins. Males are easily distinguished from the females during spawning by the tubercles on the head, scales, and fin-rays.

Spawning sites are located along shallow river shores and in backwaters with little or no current, often in lakes, on sand or gravel. Eggs are "broadcast" over pebbly gravel bottoms in streams or ponds but often in littoral areas of ponds where the bottom is covered with organic debris. Like most species of smelt, fertilized eggs are initially demersal and sticky, adhering to whatever they touch. The eggs hatch in freshwater in 11 to 24 days, depending on the water temperature. After emerging from the eggs, young pond smelt migrate downstream to salt water to grow to maturity in the sea. After two to three years at sea, they return as adults to spawn. After spawning, the majority of pond smelt die.

Since stream water temperature can affect the timing of the spawning migration, the numbers of spawning pond smelt returning to a particular stream can vary greatly from year to year depending on stream water conditions and overall ocean survival. Some streams can have two separate but overlapping migrations.

In Alaska, pond smelt are seasonally abundant in Beauford Sea drainages and south along Bering Sea coastal regions to the Copper River, Northern Gulf of Alaska.

Population discreteness for pond smelt within and among river systems in Alaska is unknown, as very little information exists on pond smelt in general. It is clear that an understanding of pond smelt genetic population structure is necessary to identify appropriate management units for maintenance of biodiversity and productivity.

Overall strength of pond smelt returns vary across the state by year and location. Why run strength remains strong in some areas while weak in other areas is unclear.

There presently is no ongoing department or federal research projects involving pond smelt stocks in Alaska.

There are a number of ways to get involved in the regulatory process for pond smelt. Since the State of Alaska is responsible for managing pond smelt fisheries throughout the state, you can participate by attending Alaska Board of Fisheries (BOF) meetings, local advisory committee meetings or writing proposals to the BOF.