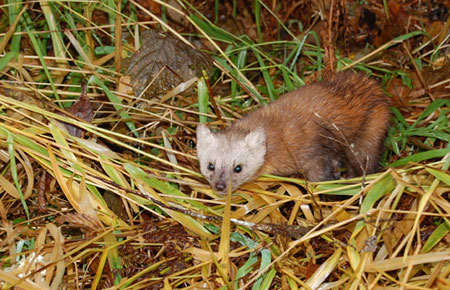 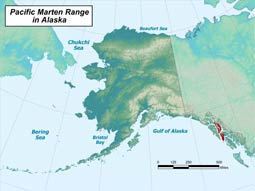 Pacific Marten can carry a parasitic nematode they can get from their small mammal prey. Researchers can use the presence of the nematode to learn much about the biogeography of the Pacific and American Marten.

The Pacific marten (Martes caurina) is a carnivorous furbearing member of the weasel family. The marten's coat is characterized by soft, dense fur which varies in color from pale yellow to dark brown, often shading to black on the feet and legs. The Pacific marten on Admiralty Island tend to be yellowish orange in color. Lighter-colored martens tend to have grayish brown tails, while darker animals have dark brown tail fur. The fur around the muzzle varies from gray to light brown with a short dark line extending up the forehead from the corner of each eye. The marten's throat and upper chest are usually pale or buff or deep orange. The ears are erect and rounded giving martens and almost cat like appearance. Martens vary in body length from 19 to 25 inches (48-65 cm), not including the tail. They may weigh up to nearly 4 pounds (1.8 kg). Males are considerably larger than females. The tail accounts for nearly a third of the marten's total length. Martens have sharp, non-retractable claws which they use for climbing as well as for holding their prey. Large furry paws allow the marten to travel easily over deep snow.

Martens depend heavily on meadow voles and red-backed voles or mice, which are their primary food source over much of Alaska. Fluctuations in food availability often create corresponding variations in marten populations. This condition is more pronounced in the less optimum habitat of the marten. Probably the second most critical food source is berries, especially blueberries, followed by small birds, eggs, and vegetation. Marten will also eat squirrels and if food is scarce enough will occasionally exhibit cannibalism. The marten is a voracious and opportunistic feeder. Carrion such as the remains of wolf kills; salmon carcasses or winter killed ungulates are eaten in many areas. Wild martens are fond of sweets such as jam. They will sometimes take treats from humans. Although martens are suited for nocturnal foraging, they are also active during mornings and evenings, especially during the long days of summer.

Martens are rather solitary creatures except during the mating season. Mating encounters are temporary and males may mate with multiple females which live within their home ranges. Mating occurs in July and August. Fertilization is followed by a period of delayed implantation, during which the fertilized eggs do not develop beyond the multi-cellular blastocyst stage. After six months the blastocysts implant in the uterus and embryos begin to develop, growing rapidly for about 27 days. The litter, averaging three young, is born in April or May.

Young martens are highly dependent at birth and weigh only about 1 ounce (28 gm). Sparsely covered with fine hair, their eyes do not open until they are 5 to 6 weeks of age. Under their mother’s care, young martens grow rapidly. By late summer they can forage for themselves and become independent. Juvenile martens usually disperse from their mother’s territory during the autumn. Martens normally mate for the first time when they are 2 years old and bear young in their third year. Some females may breed at 15 months.

Males typically have larger home ranges than females. Within sexes, home ranges are exclusive with little overlap. Home ranges of martens vary in size in response to population levels and food availability. Although 1 square mile may be sufficient for a male when food is abundant; 15 square miles may be required when food is scarce. When food is in very short supply, martens may leave their regular home range areas entirely and travel extensively to find food. Young begin to disperse in late summer, looking for vacant space to establish a home range. While hunting for food, martens cross their home range areas frequently seeking areas with small mammals and resting sites. In Southeast Alaska, martens select cavities in large, old-growth trees for den sites and resting.

Like the American marten the Pacific marten is found in forested habitats. It is most often associated with mature and old-growth evergreen forests.

Because a large portion of the Pacific marten population occurs on islands it’s important to continue monitoring the health of each individual population. They may be at risk due to lack of genetic diversity within individual populations (especially on islands) due to genetic bottle necking. They also are potentially vulnerable to over trapping and habitat loss due to commercial logging and development in some areas. Forest management practices play an important role in conservation of martens since they are most often associated with mature-old growth forested habitats.

Marten are Alaska’s most widely trapped animal and bring about $1–2 million in revenue each year. However, the majority of harvested marten in Alaska are American marten (Martes Americana) since they are more abundant throughout Alaska.

In Southeast Alaska Pacific marten research (that began in 2007 as follow up to a collaborative project between ADFG and University of New Mexico) is currently being conducted on Kuiu Island by ADFG Division of Wildlife Conservation biologist Rod Flynn, et al to study the population trends and prey abundance of the marten on Kuiu Island. The Pacific marten on Admiralty Island have also been conducted by University of Wyoming and ADFG 2007-2009.