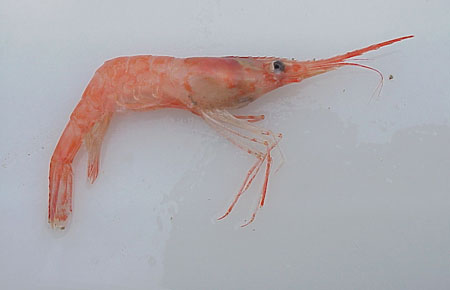 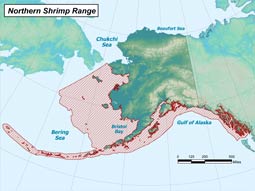 Northern shrimp move up off the bottom and the water column at night to feed on plankton.

Northern shrimp are medium-sized shrimp with a rather slender body. They have a uniform pink color with no banding. The rostrum (a horn-like projection between the eyes) is 1.5 to 2 times longer than the carapace (hard plate covering the head and thorax). The third abdominal segment, at the bend in the abdomen, has a distinctive dorsal spine. There are also single spines on the rear margin of the third and fourth abdominal segments.

Northern shrimp larvae hatch in the spring and swim throughout the water column for most of the first summer. They molt as they grow, shedding their outgrown external skeletons and growing new, larger ones. By the end of the summer, the larvae settle to the bottom and begin the juvenile phase. During the second summer, they molt again and become sexually mature, typically as males. After breeding at least one or two times as a male, they gradually transform permanently into females. The transition to female usually occurs in their fourth year of life and takes most of the summer. A very small proportion of northern shrimp start out as females and stay female throughout life.

Northern shrimp breed in the fall, after the females molt and become ready for breeding. A male grasps a female and deposits a packet of sperm on underside of her abdomen. The eggs are released by the female and fertilized as they pass over the sperm packet. The fertilized eggs (embryos) then stick to the hair-like structures on the female's pleopods (swimmerettes) of the female. Here the embryos develop over the winter, protected by the overhanging abdominal plates. When the embryos are ready to hatch the following spring, the female rests on the bottom and fans water under her abdomen to disperse the hatched larvae. Females may hatch up to 4,000 eggs, but the average is about half that.

Growth of northern shrimp is relatively fast at first, and then slows as they get older. Females with eggs do not molt while carrying eggs. Northern shrimp may live for a maximum of at least 5 or 6 years in the Gulf of Alaska. Age is typically estimated based on modes, or clusters, in the distributions of length measurements.

Unlike their heavy-bodied cousins the spot shrimp (P. platyceros) and coonstripe shrimp (P. hypsinotus), northern shrimp migrate into the water column each night to feed on small crustaceans and other zooplankton. When targeting plankton, northern shrimp filter feed, capturing their prey by trapping it among their legs. During the day however, they typically forage in the bottom sediments on worms, small crustaceans, algae, and detritus (dead organic matter). Several researchers have found that the abundance of northern shrimp is correlated with the organic content of bottom sediments.

Northern shrimp move up in the water column at night to feed, except that females carrying eggs remain near the bottom. There may also be some seasonal movements to shallower or deeper water. For example, egg-bearing females in some areas have been documented to move into shallower water when hatching larvae. Larvae may be distributed over larger areas by strong currents, but no large movements of adults have been documented.

In the Pacific Ocean, northern shrimp are found from the Bering Sea south to Oregon in the east, and south to Japan and Korea in the west. Northern shrimp are also found in the north Atlantic, but these may be a separate species or subspecies.

Northern shrimp populations in the western and central Gulf of Alaska plummeted during the late 1970s and early 1980s. Although harvests were high and may not have been sustainable in some areas, declines in abundance in both fished and unfished areas suggest that fishing played a limited role in the population collapse. The decline was generally attributed to a climate regime shift beginning in 1977, which caused significant warming of Gulf of Alaska waters. Warming is believed to have direct effects on shrimp reproduction success and favors production of fishes that prey on shrimp.

Northern shrimp abundance remains low over the western and central Gulf of Alaska, and the historically important trawl fisheries for northern shrimp remain closed. Recent trawl survey estimates in the Kodiak Archipelago and south of the Alaska Peninsula areas have been substantially below the thresholds for allowing harvest in nearly all areas surveyed. Trawl surveys in Kachemak Bay and along the outer Kenai Peninsula continue to show low abundance of northern shrimp. Status in the Bering Sea is unknown due to a lack of surveys, but abundance is believed to be low when compared to previous levels. In contrast, northern shrimp stocks in Southeast Alaska do not appear to have been affected by the regime shift. Following the decline in northern shrimp populations and in the shrimp market, the remaining trawl fisheries in the state began to target the larger sidestripe shrimp, Pandalopsis dispar.

Available information indicates that surveyed stocks outside of Southeast Alaska remain at low abundance, with no evidence of significant improvement in the near future.

Regime shifts are changes in climate-ocean ecosystems from one relatively stable state to another, usually as the result of cyclic or periodic changes in climatic conditions. In the North Pacific, cool regimes tend to benefit shrimp, crabs, and forage fish, while warm regimes tend to benefit cod, pollock, halibut, salmon, and other fishes. Due to their narrow temperature tolerance, northern shrimp may be particularly sensitive to increases in ocean temperature.

Ocean acidification is a potential threat to shrimp and many other invertebrates. The ocean absorbs carbon dioxide from the atmosphere. Carbon dioxide levels in the atmosphere are increasing from changes in land use and the burning of fossil fuels. As carbon dioxide builds up in the atmosphere, more is dissolved in seawater. This makes the ocean more acidic, which reduces the amount of calcium carbonate available for shell-building organisms such as shrimp, crabs, corals, etc. The effects of ocean acidification are projected to be larger and happen sooner at higher latitudes.

Overfishing occurs when fishery removals exceed the production by the remaining stock. Although overfishing may have occurred in the past in some areas, northern shrimp are now taken mostly as bycatch in small amounts that are unlikely to result in overfishing.

Northern shrimp once supported large and commercially important fisheries. Most of the catch was peeled mechanically and frozen, though some was sold fresh in local markets.

The first northern shrimp trawl fishery began in 1915 in Thomas Bay near Petersburg in Southeast Alaska. Trawl fisheries began in 1952 in lower Cook Inlet (Kachemak Bay) and in 1958 around Kodiak Island. Russian and Japanese trawlers harvested shrimp from the Bering Sea and Aleutians in the 1960s, but that foreign fishery was replaced with a domestic fishery in 1972. The Prince William Sound fishery began in the early 1970s followed by the Yakutat fishery in 1976 and the fishery along the outer Kenai Peninsula coast in the late 1970s.

Most of these fisheries were fairly short-lived. The Kodiak fleet and shore plants were badly damaged in the 1964 earthquake but quickly resurged and peaked during the early 1970s. Kodiak area catches then declined during the 1970s and effort shifted south to Chignik and the Alaska Peninsula. The Kachemak Bay fishery peaked in the late 1970s and early 1980s, but was closed due to low shrimp abundance in 1986. The outer Kenai coast fishery was closed in 1997. The Prince William Sound fishery shifted to targeting sidestripe shrimp following a drop in northern shrimp catches during the 1980s. The Yakutat fishery peaked in 1980-81 and produced relatively small catches through the 1993-94 season and, most recently, the 2004-05 season.

The Southeast trawl fishery has been the longest and most stable fishery. Catches peaked in the late 1950s and early 1960s but continued through the 2004 season. Harvest declined steadily since the 1997-98 season due to competition with shrimp products from the Atlantic and Pacific Northwest. The market finally collapsed during the 2005-06 season when the main buyer in Petersburg shut down after an 80-year history in the fishery. Most trawl effort in recent years has been directed toward larger and more valuable sidestripe shrimp.

Northern shrimp are typically harvested using otter or beam trawls. Otter trawls use “otter boards” or “trawl doors” that weight the net and spread it open while being towed behind the vessel. They are most effective on smooth and level bottom, but can be outfitted with roller gear (wheels) to allow fishing on rougher bottoms where the net might become snagged. The design and greater size of otter trawls relative to beam trawls allow larger catches.

In comparison, the beam trawl is a relatively simple gear type in appearance and function. A strong wooden or metal beam with metal “shoes” connected to each end of the beam hold the mouth of the net open. Beam trawls fish best on flat bottoms, but can effectively fish some gradual side slopes and irregular bottoms. Beam trawls are the only shrimp trawl allowed in Southeast Alaska where otter trawls were prohibited in 1997 by the Board of Fisheries. Beam trawls were also used in the Kodiak area in bays and nearshore waters beginning in 1971, with peak participation of 16 beam trawl vessels in the 1974-75 season.

Shrimp trawl fisheries are managed exclusively by the State of Alaska. Northern shrimp are currently harvested in trawl fisheries only in the western Gulf of Alaska, Prince William Sound, and Southeast Alaska.

Trawl fisheries in western Alaska are managed under the Westward Region Shrimp Management Plan, first approved in 1982. The plan sets minimum biomass thresholds for allowing harvest in some of the historically most productive inshore areas. Guideline harvest levels are set based on catch history from trawl surveys and a voluntary logbook. Other inshore waters are closed to otter and beam trawling. Remaining offshore waters are open by regulation without biomass thresholds or harvest guidelines, but have supported very little fishing since the 1986-87 season.

The Prince William Sound trawl fishery is managed under guideline harvest levels based on trawl surveys in the northwest and historic catches in the southwest. The fishery targets sidestripe shrimp and has a 10% bycatch limit on northern shrimp.

Southeast Alaska trawl fisheries are managed under guideline harvest levels based on historic catches. Fisheries are closed in the spring during the egg-hatching period. Multiple fishing periods are established to spread out harvest over time and take advantage of growth and recruitment. The Southeast trawl fishery has transitioned to targeting mostly sidestripe shrimp, and northern shrimp are taken as bycatch.