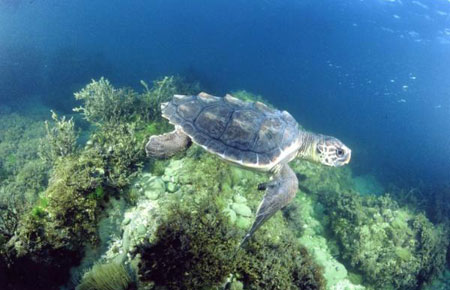 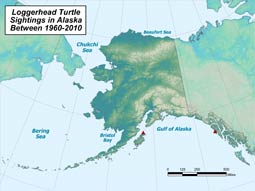 The loggerhead is the most abundant sea turtle in salt waters of the United States.

The loggerhead sea turtle gets its name from its large head which is brown to reddish brown on top and pale yellow on the sides and bottom. Its shell has a slight heart shape. The carapace is reddish brown, and the plastron is pale yellow. Average adult loggerheads measure 3 feet in length and weigh 250 pounds.

Loggerhead sea turtles reach sexual maturity at 35 years of age. After reaching maturity, females nest every 2–3 years. During the nesting season, most females will nest 3–5 times laying 45–200 eggs in each nest. Females nest mostly at night during high tides and wait two weeks between nestings. The eggs hatch after a two month incubation period, and the hatchlings emerge from the nest measuring 1.8 inches.

After emerging, the hatchlings make their way to the water. Once they reach the water they will swim for a few days until reaching an offshore convergence zone. Post-hatchlings are often caught in ocean currents and carried further offshore where they will remain until reaching 7–12 years of age. Then the juveniles travel inshore to finish maturing.

Loggerheads have very strong jaws which allow them to eat hard-shelled prey such as conchs and whelks. They eat a variety of invertebrates including crustaceans, mollusks, sponges, cnidarians, and echinoderms. They will also feed on some plants and fish. Adults forage on the bottom but sometimes eat jellyfish at the surface. Young loggerheads are opportunistic feeders consuming prey floating near the surface.

Loggerheads have specialized scales on their flippers that allow them to “walk” along the sea floor. They have also been known to bury themselves in mud on the ocean floor during cold periods.

As juveniles and hatchlings, loggerhead sea turtles may migrate long distances when they are caught up in ocean currents. After reaching 7–12 years of age the juveniles migrate from their open ocean habitat back to coastal waters. For the most part, adults remain in coastal waters but may move between foraging areas. Adult females migrate between their foraging grounds and their nesting beaches. These migrations can be quite extensive. In the Pacific, females are known to migrate 7,500 miles between nesting beaches in Japan and foraging grounds off Mexico.

Loggerhead sea turtles are found throughout temperate and tropical regions of the Pacific, Atlantic, and Indian Oceans. In the Atlantic they are distributed from Newfoundland, Canada to Argentina. In the Pacific, loggerheads have been reported from Alaska to Chile. Though rare in Alaska, loggerhead sea turtles occasionally visit Alaska’s Gulf Coast waters. They have been reported in Alaska only twice between 1960 and 2007.

Loggerheads occupy three different habitats during their lifetime. Loggerhead sea turtles use terrestrial habitat to nest. They prefer narrow, high energy beaches with a steep slope and coarse sand. After leaving the terrestrial habitat as hatchlings, they move into the oceanic habitat. They will remain in this habitat, travelling on ocean currents, until reaching 7–12 years of age. At that time, juveniles migrate to neawrshore waters where they will spend the majority of their adult lives.

Loggerhead sea turtles are not uncommon, but their population is lower than historic levels. Accurate abundance estimates are not available. They are currently listed as threatened under the Endangered Species Act (ESA), but the National Marine Fisheries Service has proposed changing the status of some populations. The Mediterranean Sea, North Indian Ocean, North Pacific, Northeast Atlantic, Northwest Atlantic, South Pacific, and Southeast Indo-Pacific populations are proposed to be listed as endangered under the ESA. The South Atlantic and Southwest Indian Ocean populations are proposed to remain listed as threatened. To learn more, visit the ADF&G Special Status page for loggerhead sea turtle.

Surveys from nesting beaches indicate that the population of loggerhead sea turtles is declining. This decline is attributed to incidental capture in fisheries, directed harvest, nesting habitat degredation and loss, and pollution.

The main threat to loggerhead sea turtles is bycatch in commercial fisheries. They are most frequently caught in longlines and gillnets, but there is some mortality from trawls, dredges, and traps and pots. These turtles are also threatened by directed harvest in many countries including several Caribbean countries. They also face habitat loss and degradation of their nesting beaches due to human activity such as beach armoring, beach nourishment, and light pollution.

Loggerhead sea turtles and their eggs are harvested for food in many countries including several in the Caribbean. They are also taken for curio items such as turtle shells.

Management of loggerhead sea turtles falls under the jurisdiction of both the National Marine Fisheries Service (NMFS) and US Fish and Wildlife Service (USFWS). NMFS is responsible for managing sea turtles at sea. When the turtles come ashore on the beaches to nest, they are the responsibility of USFWS. NMFS has implemented several fishery management measures to reduce sea turtle interactions with commercial fisheries including requiring turtle excluder devices (TEDs) on all trawl gear and the use of circle hooks in longline fisheries. The loggerhead sea turtle is protected under the Inter-American Convention for the Protection and Conservation of Sea Turtles and the Endangered Species Act (ESA).