During the summers of 2012 and 2013, Alaska Department of Fish and Game biologists tracked nine Anchorage bears (six black bears and three brown bears) using GPS collars that included a video camera. The resulting footage, combined with the location data, has provided some amazing insights into the daily lives of urban bears.

This project is a collaborative effort between research, management and education staff and has helped us better understand the habits of Anchorage’s urban bears. The data will help guide our urban bear management efforts as well as educate the public about bears.

We are sharing some of the data from the Anchorage Urban Bear Camera Collar Project through a story map about Anchorage bears. You can explore location data and video from the project by clicking on the map image below. Anchorage contains some areas of excellent bear habitat. Our urban bears find a variety of natural foods to eat, including berries, fish and vegetation. Unfortunately, however, Anchorage’s bears also have easy access to human sources of food including garbage, birdseed, pet food and livestock, which can lead to conflicts with humans. 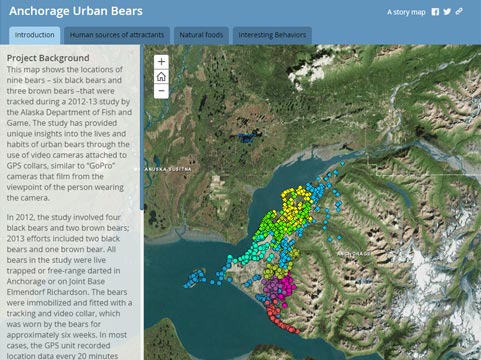 Bears are opportunistic in their feeding habits. ADF&G biologists learned from this camera project and other research that even if people keep bear attractants out of reach of bears, we will likely still have bears occasionally traveling through our neighborhoods. But the bears wouldn’t be seen as frequently, nor return often looking for human food sources such as garbage or bird feeders. Managing bear attractants is one of the best ways to minimize human-bear conflicts.

The data from this project were collected for research purposes only, and will not be used to write citations.

Just because you see a blank space on the bear story map, it does not mean that bears did not visit those parts of town. All of Anchorage is considered bear country. These data are from 2012–13 and include only nine bears, which is a small sample of Anchorage’s bear population.

To learn more about coexisting with bears, visit www.alaskabears.alaska.gov.

Read more about the project in Alaska Fish and Wildlife News, and watch some of the video compilations produced by ADF&G. See urban Anchorage from a bear's perspective!