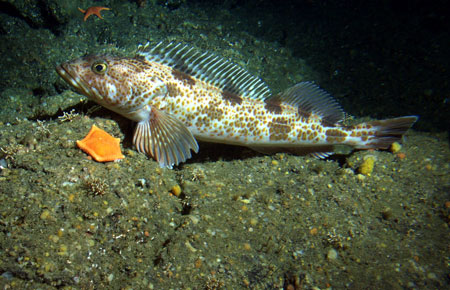 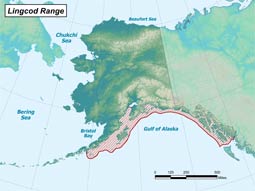 Lingcod (Ophiodon elongatus) belong to the family Hexagrammids. Contrary to their name, they are not true cods, but are greenlings. Lingcod are voracious predators and can grow to weigh over 80 pounds (35 kg) and measure 60 inches (150 cm) in length. They are characterized by a large mouth with 18 sharp teeth. Their color is variable, usually with dark brown or copper blotches arranged in clusters.

Lingcod hatch in late winter or early spring. Newly hatched larvae are approximately ¼ to ½ inch (7–10 mm) and passively move with surface ocean currents. During this period, lingcod larvae grow rapidly feeding primarily on copepods and other small fish. By mid-summer, at lengths of about 3 inches (80 mm), the larval lingcod settle on the bottom in kelp or eelgrass beds and begin feeding on juvenile herring or other small fish. By age 2, the juvenile lingcod begin to use habitats similar to those used by adult lingcod, though in shallower water. Their diet begins to resemble that of adult lingcod.

Size increases rapidly during the first years of life. Throughout this period, both sexes display similar growth patterns. However, by about age 4, female lingcod begin to grow faster than the males. The maximum age of lingcod reported is 25 years. The largest reported fish caught was 60 inches long (150 cm) and weighed 85 pounds (32 kg). Adult lingcod are voracious predators and eat almost anything, including other lingcod. Results of tagging studies have indicated the majority of lingcod are fairly sedentary and do not wander far from their home reef.

Male and female lingcod mature at different lengths and ages. Female lingcod begin to mature at 3 to 5 years of age at an average length of 24 to 30 inches. Males begin to mature at age 2 at a length of 20 inches. The number of eggs per mature female increases with both size and age. Along the Alaska coast, lingcod begin spawning in early December, with peak spawning occurring from mid-January to mid-March. During spawning, male and female lingcod gather along rocky reefs affected by wave action or strong tidal currents. After the eggs are deposited and fertilized in nests in crevices along the reefs, the female lingcod disperse to other areas and leave the male lingcod to guard the egg nests until the eggs hatch which takes from 5 to 11 weeks. Thus, while most egg masses hatch between mid-March and mid-May, some hatching occurs into June.

Lingcod are most vulnerable to predation during the egg and larval life stages. Egg nests, if left unguarded, are generally decimated within 48 hours by rockfish, starfish, sculpins, kelp greenling, and cod. The presence of a male to guard the nest from these predators appears essential for successful spawning. Unfortunately, nest-guarding males are extremely aggressive and vulnerable to predation by seals, sea lions, and anglers. Removal of a male during the nest-guarding period not only results in removal of the fish from the adult spawning population but also results in the likely loss of that male’s nest, thereby affecting future recruitment. Larval and juvenile lingcod are preyed upon by fishes such as salmon, rockfish, and other lingcod.

Lingcod are only found on the west coast of North America. They can be found from the Alaska Peninsula/Aleutian Islands south to Baja California and are common throughout Southeast Alaska, the outer Kenai Peninsula, Kodiak, and Prince William Sound. While found to depths of 1,000 feet, lingcod typically inhabit nearshore rocky reefs from 30 to 330 feet.

Lingcod are sought for sport and food. The flesh is white with a mild flavor, and is high in protein, minerals, vitamins, and omega-3 fatty acids. Lingcod are taken in subsistence, commercial, and recreational fisheries.

Lingcod have been harvested for centuries by the indigenous coastal peoples of Southeast, Southcentral, and Western Alaska. Long ago, hooks were made of wood or bone, and often ornately carved with spirit figures to attract lingcod.

Lingcod are taken in the commercial longline and dinglebar fisheries off the southern end of Vancouver Island, along the Canadian coast, and in Southeast Alaska.

Lingcod are extremely aggressive and provide an excellent fight. Once landed, they provide a tasty meal. Because of these characteristics, lingcod are highly sought by recreational anglers.

Lingcod are highly susceptible to overfishing. In some areas along the Pacific Northwest coast (including Puget Sound, the Strait of Georgia, and near Resurrection Bay) lingcod have been overharvested. Once overharvested, lingcod may require long periods to recover.

To protect this species from overharvest, lingcod fisheries in Alaska are conservatively managed. The current management approach is to assure sufficient fish are present in the spawning population to ensure future recruitment. This is done in three ways.

ADF&G has been conducting a multi-year tagging study on lingcod in order to investigate movement and exploitation rates in Southeast Alaska. A total of 8,896 lingcod have been tagged opportunistically from 1996 to 2006 along the outer coast of Southeast Alaska. Lingcod were tagged at depths of 4–183 m with 70% tagged at depths greater than 30m and 18% greater than 100 m. Most lingcod were tagged around Cape Edgecumbe, at the Edgecumbe Pinnacle Marine Reserve, or at the Fairweather Grounds. Dart tags were inserted into the flesh on the left side of the body below the front dorsal fin. A total of 344 lingcod tags have been recovered and returned with complete location information.

Female lingcod had a greater range of travel than males with females traveling 0.03 to 776.43 km and males 0.05 to 106.88 km. One female traveled 412 km from the south end of Kruzof Island to British Columbia, three females traveled about 500 km from the Fairweather Grounds to Prince William Sound, and one traveled nearly 800 km in 662 days from the north end of Kruzof Island to Prince William Sound.

Males appeared to be in shallower water and distributed closer to shore than females. Tagged males that were recovered were caught by gear at an average depth of 46 m, whereas females were recovered at an average depth of 86 m. Smaller females, less than 780 mm were found closer to shore in shallower water. Lingcod are distributed by size and sex with smaller lingcod, predominately males, inhabiting shallow nearshore reefs (Cass et al. 1984).

There are a number of ways to get involved in the regulatory process for lingcod. Since lingcod are managed by the State of Alaska you may get involved by attending Alaska Board of Fisheries (BOF) meetings, local advisory committee meetings or writing proposals to the BOF.