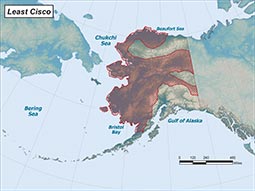 Least cisco in the Chatanika River can be harvested with spears.

The least cisco is a slender salmonid-like fish up to 19 inches in total length. Adult least cisco are distinguished from other adult ciscos of Alaska by the lower jaw, which protrudes slightly beyond the upper jaw when the mouth is closed, and by the pelvic fins, which are dusky to black in color.

Adult least ciscos are generally brownish to dark green dorsally with silvery lower sides and belly. Its dorsal fin is high and separate, while its small adipose fin is placed just anterior to its deeply forked caudal fin. In the ocean, least ciscos have dark spots on their head, back, dorsal, and adipose fins.

Least cisco populations in Alaska may be anadromous, which means they spend part of their life in the ocean and part of their lives in fresh water or non-anadromous, spending their entire life in freshwater. Riverine populations of least cisco appear to spawn between late September and early October. Lake resident populations of least cisco, similar in size to riverine populations, also appear to spawn between late September and early October. Dwarf least cisco, which mature younger and at a smaller size, appear to spawn from mid to late September. Least cisco typically reaches sexual maturity between 3 to 8 years of age. Depending on her size, a female least cisco may release from 10,000 to 80,000 eggs. Whitefish eggs are negatively buoyant and non-adhesive. Eggs are broadcast over substrate composed primarily of gravel, sand, or rock in both lotic (riverine) and lentic (lakes or ponds) environments. The eggs presumably hatch in the spring and the young descend downstream to feed and rear in river deltas, estuaries, and nearly coastal environments of rivers which support whitefish populations.

The least cisco have small superior mouths that are ideal for taking swimming prey above or in front of them in the water. Least cisco also feed on a variety of zooplankton including crustaceans, aquatic insects, and small fishes. Adult least cisco does not feed during spawning migrations.

Anadromous least cisco typically migrates into freshwater systems in late spring to late summer to spawn. Spawning is believed to occur between late September and early October. Least cisco are known to spawn in sections of the Chatanika, Alatna, and Innoko Rivers. Least cisco may spawn in portions or tributaries of the Yukon and Kuskokwim Rivers.

In Alaska, least cisco are found from the arctic coast to Bristol Bay and in most streams and lakes north of the Alaska Range. Least cisco are also found throughout Yukon and Kuskokwim River drainages.

Several studies have been conducted on several species of whitefish, including least cisco populations by a number of agencies over the years. Research indicates that Colville, MacKenzie (Canada), Kuskokwim, and Yukon River populations are quite distinct. Such information is very useful when conducting mixed stock analysis on fish collections of unknown origin.

Overall strength of least cisco returns varies across the state by year and location. Chatanika River least cisco populations have not returned to the abundance observed before the collapse of the fishery during the 1980s. Estimates of harvest rates for the Colville region indicate low to moderate harvest averaging less than 10% from 1985 to 1993. Since then the harvest in the both the commercial and subsistence fisheries has declined. Escapement studies, such as those conducted on Whitefish Lake whitefish populations, have been used to enumerate the numbers of least cisco moving into the lake as adults or out of the lake as juveniles. Currently there is not sufficient data to access the relative abundance of least cisco within or between all known populations throughout the state.

Potential overharvest from commercial, recreational, or subsistence fisheries is the main threat to the resource. The migratory behavior of the least cisco makes the species particularly susceptible to obstructions such as dams or habitat degradation. Other major ecological changes, such as those associated with the effects of global warming, could adversely affect least cisco populations. Because both climate change and industrial development are occurring simultaneously, it is difficult to attribute changes in fish populations to a single cause.

Least cisco are typically harvested as bycatch in conjunction with whitefish species fisheries targeting humpback whitefish and Bering cisco or even during salmon fisheries. Although not as sought after as other species of whitefish, the least cisco is still an important subsistence fish species for coastal and lower river communities located within drainages of the Colville, Yukon, and Kuskokwim Rivers.

Subsistence fishers do not typically target least cisco; they are generally retained as by-catch in other whitefish fisheries. The Commercial Fisheries Division of ADF&G manages these fisheries in Alaska. Subsistence surveys are conducted by both Commercial Fisheries and Subsistence divisions. There is a directed fishery for least cisco and humpback whitefish in the Chatanika River which occurs from late September through late October. As the fishery is managed by emergency order, an ADF&G permit is required, allowable gear is limited to spears only. Annual household limit is 10 whitefish (any species), with no size limits.

Numerous research projects have been conducted on least cisco throughout Alaska. Studies conducted by ADF&G biologists have included efforts to determine fecundity, size, and abundance of least cisco in the Chatanika River where recent research indicates that populations of least cisco have not fully recovered from the collapse of the fishery during the 1980s. Similar stock assessment studies have been conducted by USFWS biologists to determine distribution and migratory timing for least cisco in the Kuskokwim River watershed. These projects use radio telemetry (biologists place radio transmitter tags into fish and then follow the signal to track the fishâ€˜s movements). Researchers may also use fish weirs (essentially a fence installed across flowing water to block the passage of fish) to count whitefish or salmon as they migrate upstream. The weir prevents fish from migrating upstream until a gate is opened which allows passage through an opening in the weir. Weirs are typically used in relatively clear, narrow, and shallow streams. The information gathered is used to better manage and protect least cisco stocks and habitat. Future studies that delineate critical spawning habitat will be important to ensure these areas are adequately protected.

There are a number of ways to get involved in the regulatory process for least cisco. Since the State of Alaska is responsible for managing least cisco fisheries throughout the state, you can participate by attending Alaska Board of Fisheries (BOF) meetings, local advisory committee meetings or writing proposals to the BOF.