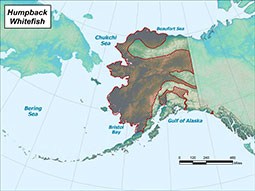 The humpback whitefish is a medium sized fish up to 20 inches in total length. Humpback whitefish are distinguished from other whitefishes by the pronounced hump behind the head in adult fish with an inferior mouth, which means that the mouth that points downward, with the upper jaw being longer than the lower jaw. Sometimes referred to as a sub-terminal or ventral mouth, the inferior mouth is often protrusile, meaning it can be extended forward, sometimes a significant distance. This allows the fish to grab food particles or prey that would otherwise be out of reach. This is an adaptation often observed in bottom feeding fish such as the humpback whitefish.

Adult humpback whitefish are generally dark brown to midnight blue dorsally fading to silver on sides with a white belly. The adipose fin is well developed and is often larger in male fish. The tail has a dark posterior edge. No parr marks are found on juvenile fish.

Anadromous humpback whitefish typically migrate into freshwater systems in late spring to late summer to spawn. Spawning can occur from September through November, depending on the system. Humpback whitefish are known to spawn in the mainstem waters and tributaries of the Yukon, Kuskokwim, Tanana, Kvichak, Susitna, Copper, and Alsek Rivers.

Several studies have been conducted on humpback whitefish populations by a number of agencies over the years. Research indicates that Susitna, Kuskokwim, and Yukon River populations are quite distinct. Such information is very useful when conducting mixed stock analysis on fish collections of unknown origin. It is clear that an understanding of humpback whitefish genetic population structure is necessary to identify appropriate management units for maintenance of biodiversity and productivity.

Potential overharvest from commercial, personal use or subsistence fisheries is the main threat to the resource. The migratory behavior of humpback whitefish makes the species susceptible to obstructions such as dams or habitat alteration, disturbance, or degradation. Because these fish rely on long-distance dispersals, efforts should continue to protect and identify the movement corridors that link critical habitat areas to ensure the long-term survival of humpback whitefish.

The humpback whitefish is known to be an important subsistence fish species for coastal and riverine communities located within drainages of the Colville River, Kuskokwim River, Yukon River, and Kvichak River. The Chatanika River has supported a prolific and popular recreational spear fishery targeting humpback whitefish since the 1970s. There is a directed fishery for humpback whitefish and least cisco in the Chatanika River which occurs from late September through late October. As the fishery is managed by emergency order, an ADF&G permit is required, allowable gear is limited to spears only. Annual household limit is 10 whitefish (any species), with no size limits.

Numerous research projects have been conducted on humpback whitefish throughout Alaska. The Alaska Department of Fish and Game, U.S. Fish and Wildlife Service, and University of Alaska have all studied humpback whitefish in recent years. ADF&G projects include abundance, size composition, fecundity, and stock assessment of Chatanika River whitefish. U.S. Fish and Wildlife Service projects have sought to identify spawning habitats and spawning migration patterns in some reaches of the Yukon and Kuskokwim River drainages. Many of these projects use radio telemetry (biologists place radio transmitter tags into fish and then follow the signal in order to track the fishâ€˜s movements). University of Alaska projects focused on population dynamics, movement patterns, and spawning habitat use.

There are a number of ways to get involved in the regulatory process for humpback whitefish. Since the State of Alaska is responsible for managing humpback whitefish fisheries throughout the state, you can participate by attending Alaska Board of Fisheries (BOF) meetings, local advisory committee meetings or writing proposals to the BOF.