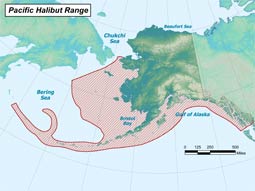 The Alaska state record sport-caught halibut was caught in Unalaska Bay in 1996 and weighed 459 pounds.

Pacific halibut are the largest flatfish in Family Pleuronectidae. Halibut and other flatfish are flattened laterally, and swim sideways, with one side facing down and the other facing up. The upper side is typically gray to brown, or nearly black, with mottling and numerous spots to blend in with a sandy or muddy bottom. The underside is typically white. Virtually all halibut are right-eyed, meaning both eyes are found on the upper, dark side of the body. Left-eyed halibut are rare; one report suggested a ratio of about 1 in 20,000. In these fish, the eyes and dark pigment are on the left side of the body, and the fish swims with the right (white) side facing down. The dorsal fin is continuous from near the eyes to the base of the tail, and the anal fin extends from just behind the anus to the same point on the other side. The mouth extends to the middle of the lower eye or beyond, and is nearly symmetrical. The scales are quite small and buried in the skin, making the skin appear smooth. The tail is broad, symmetrical, and lacks a distinct fork. The lateral line is strongly arched over the pectoral fin. The maximum reported size is over 8 feet in length and over 500 pounds.

Most male halibut are sexually mature by about 8 years of age, while half of the females are mature by about age 12. Most halibut spawn during the period November through March, at depths of 300 to 1,500 feet. Female halibut release anywhere from a few thousand to several million eggs, depending on the size of the fish. Eggs are fertilized externally by the males. About 15 days later, the eggs hatch and the larvae drift with deep ocean currents. As the larvae mature, they move higher in the water column and ride the surface currents to shallower, more nourishing coastal waters. In the Gulf of Alaska, the eggs and larvae are carried generally westward with the Alaska Coastal Current and may be transported hundreds of miles from the spawning ground.

Halibut larvae start life in an upright position like other fish, with an eye on each side of the head. The left eye moves to the right side of the head when the larvae are about one inch long. At the same time, the coloration on the left side of the body fades. The fish end up with both eyes on the pigmented (olive to dark brown), or right, or upper side of the body, while their underside is white. By the age of 6 months, young halibut settle to the bottom in shallow nearshore areas.

Halibut feed on plankton during their first year of life. Young halibut (1 to 3 years old) feed on euphausiids (small shrimp-like crustaceans) and small fish. As halibut grow, fish make up a larger part of their diet. Larger halibut eat other fish, such as herring, sand lance, capelin, smelt, pollock, sablefish, cod, and rockfish. They also consume octopus, crabs, and clams.

Female halibut grow faster and reach larger sizes than male halibut. Male halibut rarely reach a length of three feet. Halibut size-at-age has changed over time. For example, the average length and weight of halibut of each age increased from the 1920s to the 1970s, and has decreased since then. By the 2000s, 12-year-old halibut were about three-quarters the length and about one-half the weight they were in the 1980s. Reasons for changes in size-at-age are unknown. The changes are not correlated with changes in ocean temperature. Other possible causes include competition with other species, competition among halibut, climate effects on growth or survival, effects of fishing and size limits, changes in how halibut are aged, or combinations of factors.

Juvenile and some adult halibut migrate generally eastward and southward, into the Gulf of Alaska coastal current, countering the westward drift of eggs and larvae. Halibut tagged in the Bering Sea have been caught as far south as the coast of Oregon, a migration of over 2,000 miles. Because of the extensive movements of juvenile and adult halibut, the entire eastern Pacific population is treated as a single stock for purposes of assessment. Research is continuing to determine if there are spawning sub-stocks of varying productivity.

Halibut also move seasonally between shallow waters and deep waters. Mature fish move to deeper offshore areas in the fall to spawn, and return to nearshore feeding areas in early summer. It is not yet clear if fish return to the same areas to spawn or feed year after year.

Pacific halibut are found on or near the continental shelf through much of the northern Pacific Ocean, from California northward to the Chukchi Sea, and from the Gulf of Anadyr, Russia southward to Hokkaido, Japan. They are typically found near the bottom over a variety of bottom types, and sometimes swim up in the water column to feed. They usually inhabit waters between 20 and 1,000 ft, but have been found at depths up to 3,600 ft. They prefer water temperatures in the range 37-46º F.

The U.S. and Canadian commercial halibut fishery has been certified sustainable by the Marine Stewardship Council.

Pacific halibut are a highly sought for food. The flesh is white with a mild flavor, and is high in protein, minerals, vitamins, and omega-3 fatty acids. Halibut are taken in subsistence, commercial, and recreational fisheries.

Halibut have been harvested for centuries by the indigenous coastal peoples of Southeast, Southcentral, and Western Alaska. Long ago, hooks were made of wood or bone, and often ornately carved with spirit figures to attract halibut. Lines were made of twisted fibers of cedar, animal sinew, or kelp. Halibut meat was preserved by drying or smoking.

Despite a long history of harvest, federal halibut fishing regulations did not officially recognize and authorize the subsistence fishery until 2003. Members of federally recognized tribes as well as residents of designated rural areas and communities are now eligible to obtain a Subsistence Halibut Registration Certificate (SHARC) in order to participate in this fishery. Special permits for community harvest, ceremonial, and educational purposes also are available to qualified Alaska communities and Alaska Native Tribes.

The commercial longline fishery began in 1888 off the southern end of Vancouver Island, along the Canadian coast, and in Southeast Alaska. Fishing was from dories that delivered to larger sailing ships. The fishery rapidly expanded, reaching waters of the central and western Gulf of Alaska by about 1920. Dory fishing all but ended by the early 1930s. Halibut are now taken commercially throughout their range, by a variety of catcher vessels. Hook and line is the only legal gear for the directed fishery, and bycatch on other gears may not be retained.

The commercial fishery has been managed under an Individual Fishery Quota (IFQ) system since 1995. The IFQ system was put into place to end the “race for fish” caused by too many boats fishing during restricted seasons of a few days. The IFQ system has resulted in longer seasons, improved vessel safety, and fresh halibut being available about 8 months per year.

Before 1973, sport halibut fishing was legal only during the commercial halibut season. Sport fishing during the closed season was common but the regulations were not enforced because the fishery was small. With growth in the sport fishery, the International Pacific Halibut Commission officially recognized the sport fishery and established regulations in 1973. In 1975, the sport fishery in Alaska was estimated to have taken 10,000 pounds of halibut. Sport harvest in Alaska steadily increased after that, reaching over 8 million pounds by the mid-2000s. The vast majority of the coastwide sport harvest is taken in Southeast and Southcentral Alaska.

Many sport halibut anglers do not own a seaworthy boat and must fish using a charter service. The charter industry in Alaska has grown along with tourism, catering to residents and nonresidents alike. Charter boats are available at all major ports, and the charter fishery now accounts for about 60–70% of the total Alaska sport harvest. The vast majority of charter clients fishing in Southeast Alaska are non-residents, while resident and non-resident anglers commonly use charter boats in the more heavily populated Southcentral region.

The Pacific halibut stock is managed under the Pacific Halibut treaty between Canada and the United States. The International Pacific Halibut Commission (IPHC) is responsible for assessing the status of the stocks and setting harvest strategies and catch limits that provide for optimum yield. Within the United States, the North Pacific Fishery Management Council (NPFMC) is responsible for allocating the halibut resource among users and user groups fishing off Alaska. The National Marine Fisheries Service (NMFS) is responsible for developing, implementing, and enforcing regulations pertaining to management of halibut fisheries in U.S. waters. The State of Alaska participates in management through the ADF&G Commissioner’s seat on the North Pacific Fishery Management Council. ADF&G licenses anglers and sport fishing businesses and guides, monitors and reports on sport and subsistence harvests, and assists federal agencies with preparation of regulatory analyses.

The Alaska commercial longline fishery has been managed under an Individual Fishery Quota (IFQ) system since 1995. The IPHC sets the seasons and catch limits annually, and the catch limit is apportioned among U.S. fishermen based on individual quota shares. The sport fishery in Alaska is generally managed under daily bag and possession limits. Sport charter fisheries may have more restrictive regulations, such as size limits, to keep harvest within allocations or guidelines set by the North Pacific Fishery Management Council. A limited entry system was implemented for the charter boat fleet in 2011, and a catch sharing plan was recently developed to allocate halibut between the commercial and charter fisheries in Alaska.

Most research on halibut is conducted by, or in conjunction with, the International Pacific Halibut Commission (IPHC). The IPHC conducts annual longline surveys to monitor changes in abundance, as well as age, sex, and size structure of the population. The IPHC conducts research on movements, spawning, and various other aspects of halibut biology. Much of this information is incorporated into stock assessment models that are used to estimate abundance and evaluate alternate harvest strategies. These stock assessment methods and policies are periodically examined to ensure that they are as accurate as possible and provide for optimum yield. Research has also been conducted by numerous other individuals and agencies.

There are several opportunities for direct public involvement in management of Pacific halibut fisheries. You can get involved by attending the International Pacific Halibut Commission annual meeting, or regular meetings of the North Pacific Fishery Management Council. The IPHC accepts regulatory proposals in the fall of each year, and users can testify in person or in writing at IPHC and NPFMC meetings. In addition, stakeholders may review and submit written comments to the National Marine Fisheries Service on proposed rules published in the Federal Register.

Halibut fishermen can contribute to responsible use of the public resource by following all applicable regulations, participating in voluntary harvest surveys, and reporting suspected illegal activities.