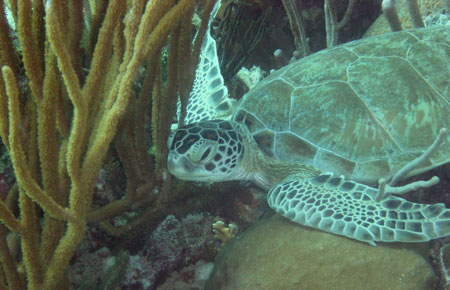 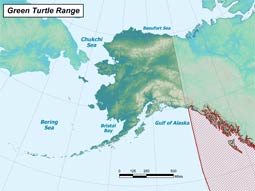 Green sea turtles are the only herbivorous sea turtle.

Green sea turtles are the largest hard-shelled sea turtle reaching lengths of over 3 feet and weighing 300-350 pounds. They have a relatively small head compared to their body size. Their carapace is smooth and its color varies between individuals. It may be a shade of black, gray, green, brown, or yellow. The plastron is yellowish white. They have one claw on each flipper.

Green sea turtles reach sexual maturity between 20-50 years of age. After maturing, females nest every 2-4 years on their natal beaches. During the nesting season, females lay an average of 5 clutches of eggs with approximately two weeks between each nesting. Each clutch has an average of 135 eggs.

Eggs hatch approximately 2 months after being laid. The hatchlings, only 2 inches long, emerge from the nest and move into the water. After the hatchlings enter the ocean, it is believed that they travel to offshore areas to live for several years. Once the juveniles reach a certain size or age, they travel to nearshore foraging areas.

Green sea turtles are herbivorous eating mostly algae and seagrasses. It is thought that this diet gives their fat its green hue. As hatchlings and juveniles, they feed on pelagic plants and animals near the surface in offshore areas. Adults transition to an exclusively herbivorous diet and feed in nearshore benthic habitats.

Green sea turtles undergo their first migration as hatchlings when they travel from their natal beaches to offshore areas to grow. Once the juveniles mature, they migrate to shallower coastal waters. In breeding years, adult females migrate from their coastal foraging areas to nesting beaches. These migrations may be hundreds to thousands of kilometers each way. The maximum migration is about 3,000 kilometers.

Green sea turtles use a variety of habitats. Oceanic beaches are used for nesting. Females need open beaches with a gentle slope and minimal disturbance. Adults use benthic foraging areas in coastal waters. They are generally attracted to bays and lagoons with a high density of seagrasses or algae. Hatchlings and juveniles spend their time in offshore convergence zones.

The population of green sea turtles has declined dramatically over the last 100-150 years. During this time, there has been an estimated 48–65% decline in the number of nesting females. This decline is attributed to the long-term harvest of eggs and adults on nesting beaches and adults and juveniles in foraging areas.

One of the main threats to green sea turtles is the continued harvest of turtles and eggs in some parts of the world. Bycatch in fisheries is also a major source of mortality. Green sea turtles are most often entangled in gillnets but are also caught in trawls, traps and pots, longlines, and dredges. In some regions, disease is a problem. Fibropapillomatosis is becoming increasingly common in green sea turtles in some parts of its range. This disease causes the formation of internal and external tumors. These tumors may interfere in vital processes and can lead to death in turtles with heavy tumor loads. Green sea turtles also suffer from habitat degradation and loss in areas where development has altered the beaches.

In many areas, adult green sea turtles and eggs are harvested for human consumption. Their skins are also used to make leather, and turtle oil is used in some cosmetics.

Management of green sea turtles falls under the jurisdiction of both the National Marine Fisheries Service (NMFS) and US Fish and Wildlife Service (USFWS). NMFS is responsible for managing sea turtles at sea. When the turtles come ashore on the beaches to nest, they are the responsibility of USFWS. NMFS has implemented several fishery management measures to reduce sea turtle interactions with commercial fisheries including requiring turtle excluder devices (TEDs) on all trawl gear and the use of circle hooks in longline fisheries. The green sea turtle is protected under the Inter-American Convention for the Protection and Conservation of Sea Turtles and the Endangered Species Act (ESA).