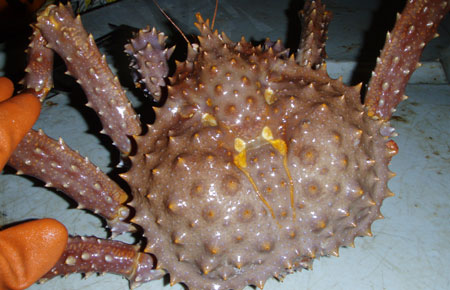 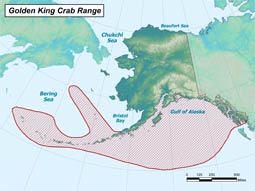 Golden king crab communicate by drumming or waving their pincers.

King crabs, also called stone crabs, are a family of decapod crustaceans mainly found in cold seas. There are approximately 40 known species of king crabs. In Alaska, there are only three commercially harvested species; the red king crab, the blue king crab and the golden king crab. There is a fourth species of king crab found in Alaska; the scarlet king crab, though its low abundance and comparatively-small size make it commercially undesirable.

Golden king crab (Lithodes aequispinus) are found from British Columbia to the Aleutian Islands and Japan. When compared to red and blue king crabs, golden king crab are smaller in size, averaging 5–8 lb. They have a golden-colored shell and five pairs of legs, the front pair carrying their claws. They have a distinctive carapace (the shell covering their back) with a fan-shaped "tail" tucked underneath the rear of the shell. Golden king crab generally have the lowest percentage of meat "infill" inside the shell. They taste similar to red and blue king crab, although perhaps somewhat sweeter.

Adult females brood thousands of embryos underneath their tail flap for about a year. When the embryos are fully developed, they hatch as swimming larvae, but they are still susceptible to the movements of tides and currents. Larvae feed on plant and animal plankton for several months, undergoing several body changes with each molt. Eventually, the larvae settle to the ocean bottom and molt into non-swimmers, looking for the first time like king crab as we normally think of them. At this stage they are smaller than a dime! Golden king crab appear to settle in water of 300 feet or deeper.

Because a crab’s skeleton is its shell (made mostly of calcium), it must molt its shell in order to grow. Juveniles molt many times in their first few years, then less frequently until they reach sexual maturity in four or five years. Adult females must molt in order to mate but males do not. Adult males often skip a molt and keep the same shell for one or two years.

Adult golden king crab exhibit offshore “deep and back” annual migrations. They come to shallow water in late winter and by spring the embryos hatch. Adult females and some adult males molt and mate before they start their offshore feeding migration to deeper waters. Adult crabs tend to segregate by sex once off the mating/molting grounds. Red, blue and golden king crabs seldom co-exist, although their depth ranges and habitat often overlap.

Golden king crab eat a wide assortment of marine life including worms, clams, mussels, snails, brittle stars, sea stars, sea urchins, sand dollars, barnacles, crabs, other crustaceans, fish parts, sponges, and algae. Crabs have a strong sense of smell, helping them to find prey which they then grasp with their claws prior to consumption.

King crabs are eaten by a wide variety of organisms including, but not limited to, fishes (Pacific cod, sculpins, halibut, yellowfin sole), octopuses, other king crabs (they can be cannibalistic), sea otters, and several species of nemertean worms, which have been found to eat king crab embryos.

Mature crabs have a very set migration pattern. They come into shallow water to mate in late winter. By spring, when the embryos hatch and set off on their own, they migrate back to their deep-water feeding grounds.

Golden king crab are caught in the waters surrounding the Aleutian Islands. Significant populations occur in pockets off the Pribilof and Shumagin Islands, Shelikof Strait, Prince William Sound and at least as far south as lower Chatham Strait in Southeast Alaska, where an annual commercial fishery exists. It should be noted that they occur in deeper water than the red king crab, often in depths exceeding 300 fathoms (1,800 ft; 550 m). Throughout their Alaskan range, golden king crab are one of the most abundant species of crab.

Juvenile golden king crab rely on sessile invertebrates for rearing habitat, however these invertebrates are slow-growing and at risk in certain areas due to damage caused by bottom trawling. For this reason, large tracts of the sea floor along the Aleutian Island chain have been protected from bottom trawling.

Alaskan king crab fishing is carried out during the winter months in the waters off the coast of Alaska and the Aleutian Islands. The commercial harvest is performed during a very short season, and the catch is shipped worldwide. Large numbers of king crabs are also caught in Russian and international waters.

Beyond commercial, there are also subsistence and personal-use fisheries for king crabs in Alaska.

The U.S. federal government through the North Pacific Fishery Management Council (NPFMC) and the Alaska Department of Fish and Game (ADF&G) jointly manage the Bering Sea and Aleutian Islands crab stocks, whereas the ADF&G solely manages the Gulf of Alaska crab stocks.

There are several opportunities for direct public involvement in management of the golden king crab. You can get involved by submitting either a proposal or a petition to the Board of Fish.