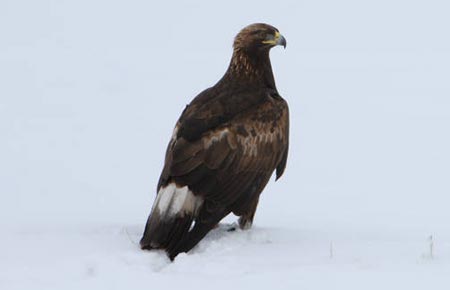 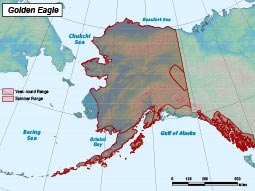 While there are six identified subspecies of golden eagle, only one, the Aquila chrystaetos canadensis, exists in North America.

The golden eagle is named for the golden buff-colored feathers on the crown and nape of the neck. The adult body color is usually dark brown, and the dark-tipped tail is either darkly barred or spotted. Adult plumage is acquired over a three to four year period and involves a gradual reduction in the amount of white coloration. Until juvenile bald eagles attain their adult plumage, they are often confused with the golden eagle. The bald eagle may be distinguished by a lack of feathers on its lower legs and whitish lining on the forward part of its wings. Immature golden eagles have white wing patches and white at the base of the tail. This bird has a wing span from six to seven feet (1.8–2.1 m) and weighs eight to 12 pounds (3.6–5.4 kg), with females usually being the larger of the sexes.

Time of courtship for golden eagles varies with elevation and latitude. Golden eagles arrive at Denali National Park in March and as late as May in the Brooks Range. They are monogamous and maintain pair bonds for several years. Egg laying takes place from late April through May, and usually a clutch of two eggs is laid with 35 to 45 days needed for incubation. It takes 90 to 100 days for the hatchlings to become independent of their parents. Nests (eyries) as large as 10 feet across (3 m) and 4 feet (1.2 m) thick are usually located on cliffs, but trees may be used. Overall fledging success is approximately one eaglet per pair. Since mortality in juveniles can be as high as 75 percent, it could take one mating pair up to 10 years to produce two breeding birds.

The golden eagle feeds mainly on ground squirrels, hares, and birds such as cranes, owls, and ptarmigans. While golden eagles are capable of killing large game animals (i.e., Dall sheep lambs, etc.), few killings have been observed. Eagles also feed on carrion. Like bald eagles, golden eagles can lift about three or four pounds, a bit more if they swoop down with some airspeed and grab something.

Golden eagles are found in northern regions of the entire northern hemisphere. In Alaska, the range extends as far north as the Brooks Range with a limited and scattered distribution in Southeast and rare occurrences in the Aleutians or Alaska Peninsula. Not all eagles migrate but most go south when food supplies decline, especially more northern populations.

Golden eagles prefer open habitat such as prairie, arctic and alpine tundra, open wooded country, and barren areas, particularly hilly or mountainous regions. When breeding, they select rugged areas with cliffs or bluffs for nests. These nest sites may be in mountainous regions, near coastlines, or in subalpine or alpine environments.

Loss of undisturbed habitat seems the most serious threat to maintaining healthy populations of golden eagles. Increasing human disturbance of eagles, and remote area development, pose similar problems for golden eagles as they do for Alaska’s bald eagles. Golden eagles are prone to abandoning their nests and young when their nest site has been disturbed by human encroachment. They are also particularly susceptible to electrocution from power lines due to their large wingspan, and poisoning from ingesting poisoned food meant for coyotes.

Eagle feathers are used for religious and cultural purposes by Native Americans, and the Department of the Interior is responsible for facilitating the distribution of eagle carcasses for these purposes.

Federal and state laws protecting the bald eagle and the golden eagle make possession illegal. They are protected under the Bald and Golden Eagle Protection Act and the Migratory Bird Treaty Act. However, it is possible to get a permit from the U.S. Fish and Wildlife Service to possess eagle feathers and parts for specific purposes (including scientific and cultural).