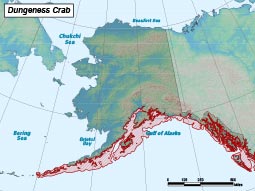 Dungeness crab females can store viable sperm for as long as 2 years and reproduce without mating in the current season.

The Dungeness crab, Cancer magister/ syn. Metacarcinus magister, inhabits bays, estuaries, and the nearshore coast of Alaska. The species is named after one of its representative habitats––a shallow, sandy bay inside of Dungeness Spit on the south shore of the Straits of Juan de Fuca. It is widely distributed, and can be found as far north as the Aleutian Islands and as far south as Magdalena Bay, Mexico. This crab supports commercial personal use and sport fisheries in Alaska. The Dungeness crab is a decapod, related to shrimp, lobster, and other crab. It has a broad, oval body covered by a hard chitinous shell, four pairs of walking legs and a pair of claws. This species can be distinguished from other commercially important crab (king and Tanner crab) because its legs are much smaller and shorter in relation to its body size and because the dorsal surface of its carapace is smooth and spineless.

The legal measurement for Dungeness crab in Alaska is shoulder width, measured across the back of the carapace between the two notches immediately anterior to the tenth anterolateral spine, also known as "notch to notch". Only male Dungeness crab may be taken and sex can be determined from the shape of the crab’s abdomen. Females have a slightly rounded abdomen while males have a triangle-shaped abdomen. This becomes very pronounced when females mature into their egg-bearing developmental stage but is slightly less obvious for younger stages. The legal size for Dungeness crab in Alaska is 6.5 inches notch to notch.

Dungeness crab mate from spring through fall. Males are polygamous––each male crab may mate with more than one female. This may be an important factor in maintaining the reproductive viability of this species because only male crab can be harvested. Male crab only mate with female crab that have just molted (shed their old exoskeleton). Fertilization of eggs occurs about a month after mating when the female’s shell has hardened; until this time, the female crab stores the sperm in internal pouches especially designed for this purpose. Females can store sperm for as long as 2 years and old, large females will often use stored sperm to fertilize their eggs rather than molting and mating. The female extrudes eggs through pores on her ventral surface; they are fertilized as they pass through the stored sperm and adhere to hairs on the abdominal appendages where they are carried until hatching. A large female Dungeness crab can carry 2.5 million eggs.

After hatching, crab zoea larvae are planktonic and swim away freely. Larval development takes from 4 months to as long as a year in Alaska. Six successive larval stages (5 zoea and 1 megalopa) occur before the crab molts into the first juvenile stage. Crabs grow each time they molt. During the first two years both sexes grow at similar rates, but after two years males grow more quickly than females. Sexual maturity may be reached at three years. The legal size of 6.5 inches in shell width can be reached at four to five years of age, at which time the crab will weigh between 2 and 3 pounds. A large male Dungeness crab can exceed 10 inches in shell width. The estimated maximum life span is from 8 to 13 years.

Dungeness crab are widely distributed subtidally and prefer a sandy or muddy bottom in marine waters. However, they are tolerant of salinity changes and can be found in estuarine environments. They are most abundant in waters shallower than 30 meters, but have been found as deep as 200 meters.

Dungeness crab foraging behavior coincides with their habitat. These crab scavenge along the sea floor for organisms that live partly or completely buried in the sand. They are both scavengers and predators, and their diet can include bivalves, worms, shrimp, fish, and small crab.

Dungeness crab are distributed from the Aleutian Islands to Magdalena Bay, Mexico.

The primary threats to this species include predation by sea otters, ocean acidification, habitat damage (from activities such as log transfer facilities and intertidal development), and overfishing.

Subsistence harvest of Dungeness crabs by Alaska residents is permitted in some Alaska state waters. Bag limits and seasons are generally more liberal and gear requirements less restrictive than for personal use or sport fisheries and vary by area. Crabs may be harvested by hand, dip net, using hooked or hook less hand lines, or with pots, ring nets or dive gear. Subsistence fishery catch may be shared with all members of the community.

Major commercial fisheries for this species occur in California, Oregon, Washington, British Columbia and Southeast Alaska. The Alaska Fishery and Fur Seal Industries publication made the first historical reference to the Alaska Dungeness crab fishery in 1916. This crab was first commercially canned at Seldovia in 1920. Today, Dungeness crab is processed by shore based processors, catcher processors, and floating processors. Crab product type varies; where processors are well-established and air service unreliable, crab are generally sold whole or in sections as a fresh or frozen product. However, where air service is reliable and processing capacity less so, crab are often shipped live to specialty markets where they can fetch a premium price.

Dungeness crab are caught by commercial fishers using circular pots typically baited with herring, squid, or clams. Pots are usually about 40 inches in diameter and 14 inches high. They are constructed of 3/4-inch round, steel frames wrapped in rubber tubing then covered with stainless steel wire mesh woven in 2-inch squares. Two 4-3/8" diameter escape rings are required to be built in each pot to keep the pot from filling with undersize crab.

The number of pots that can be set by a vessel and the fishing season varies by management area in Alaska.

Residents of Alaska may harvest Dungeness crab for personal use. This fishery is often incidental to recreational boat outings. Crab pots similar to those used in the commercial fishery, ring nets, diving gear, dip nets, and hooked or hookless handlines can all be used to harvest crab for personal use. Dungeness crab are sometimes stranded by minus tides and can be picked up by an observant beachcomber. Be forewarned, the mighty pincers of this crab can move quickly and catch you unaware!

Personal use anglers fish at depths between 3 and 20 fathoms where more legal sized male crab can be found. They usually bait their pots with fresh fish carcasses, the most convenient bait. The number of crab that can be kept varies, depending on the area fished. To take more than you can use is a waste and a shame, because the Dungeness crab is one of the great fringe benefits of living in coastal Alaska.

Dungeness crab are usually boiled for approximately 20 minutes. As a cautionary note, paralytic shellfish poisoning (PSP) has been found in the internal organs of Dungeness crab, therefore, butcher the crab before cooking and do not eat the internal organs including the "crab butter" (hepatopancreas). Where or when the toxin is found is unpredictable, but high levels have been found in Dungeness crab throughout Alaska. Take this one precaution and continue to enjoy one of Alaska's tastiest seafoods!

The Dungeness crab fishery in Alaska has historically been managed by size, sex, and season or 3-S management. The size limit is 6.5 inches (165 mm), only males are harvested, and the fishery is closed during the female molt and mating period from mid-August to the end of September, and during most of the male molt period.

While there is no active Dungeness crab stock assessment program as the species is managed by size, sex, and season, ADF&G has conducted Dungeness crab research projects in Kodiak, Central, and Southeast regions. Some more recent findings are summarized as follows.

Is the commercial size limit of Dungeness crabs Cancer magister/ syn. Metacarcinus magister in Alaska appropriate based on their size at physiological and functional maturity? (PDF 1,884 kB)

June legal CPUE has only limited ability in indexing population, as crabs in most areas are either not completely catchable or have not yet molted into the fishery at this time. The summer season overlaps male molt period.

Management of fisheries in state waters is achieved through regulations promulgated by the Alaska Board of Fisheries (BOF). The BOF holds regular meetings to revise old regulations and promulgate new ones, and takes input from stakeholders at these meetings. For BOF meeting schedules, agendas, proposals, forms, and contact information please visit our Alaska Board of Fisheries webpage.

Management of Dungeness crab fisheries is achieved through regulations promulgated by the Alaska Board of Fisheries (BOF). The BOF holds regular meetings to revise old regulations or promulgate new ones and takes input from stakeholders at these meetings. For BOF meeting schedules, agendas, proposals, forms, and contact information please visit our Alaska Board of Fisheries webpage