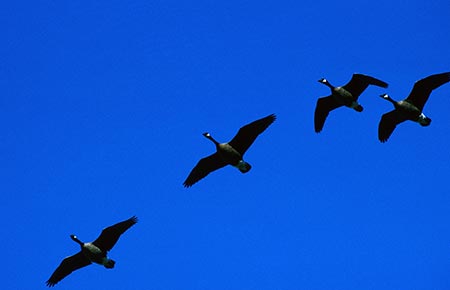 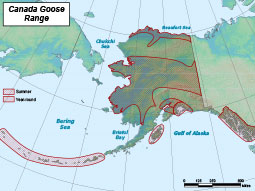 The estimated abundance of Canada geese in Alaska exceeds 30,000 birds.

The Canada goose is an iconic waterfowl, common, familiar and widespread across North America. It's a large bird with a black head and neck and a distinctive white "chinstrap." They have brownish-grey upper parts and paler brown breast and sides. They are classed into seven subspecies varying in body size and plumage coloration. Body size varies tremendously across their range, the largest can reach 45-inches long with a wingspan up to 75 inches; and can weigh more than eight pounds.

Canada geese mate for life, first breeding occurs at two or three years of age. Incubation is done by the female and lasts 25-30 days. Pairs generally establish a nesting territory; they produce an average of four or five eggs and raise the young as a family unit. Goslings are precocial (like most waterfowl — able to walk, swim and feed themselves shortly after hatching). Adults are well-known to be protective of young and can be aggressive - domestic geese are known to serve as able "watchdogs."

Like some other waterfowl, family groups are combined in summer to form "creches" which may be guarded by several parents. Geese are flightless for about a month in mid-summer (while goslings are also flightless) while they grow new wing feathers. When migrating, Canada geese fly in a distinctive V formation.

These geese are considered dabblers and grazers, and can walk well on land. They feed on a variety of terrestrial and aquatic plants.

Predators of geese and their nests include foxes, coyotes, wolves, bears, wolverines, gulls, eagles and ravens.

Mortality is highest for goslings, geese that survive to adulthood may live 10 to 20 years. The oldest known wild Canada Goose was at least 33 years, 3 months old when she was shot in Ontario in 2001. She had been banded in Ohio in 1969.

Canada geese nest in wetlands throughout Alaska. Some live in Alaska year-round. Geese nest and overwinter in parts of Southeast Alaska, including in the Mendenhall Wetlands in Juneau, Prince William Sound and on Kodiak Island. However, most Canada geese are migratory and winter in areas from western Canada to the southern United States. Some subspecies have fairly specific summering and wintering areas — for example, the dusky Canada goose nests primarily in Alaska's Copper River Valley and winters in Oregon's Willamette Valley.

Canada geese are adaptable and can be tolerant of people; they readily take to urban parks and can be a nuisance in some areas.

The estimated abundance of Canada geese in Alaska exceeds 30,000 birds based on region-specific aerial surveys conducted by the USFWS. The population of dusky Canada geese is estimated by an aerial survey of breeding birds on the Copper River Delta and a plot survey of nesting geese on Middleton Island. Dusky Canada geese nesting in Prince William Sound cannot be enumerated because of the difficulty surveying in forested habitat. The 2019 estimate of dusky Canada geese was 17,727 birds. Lesser Canada geese are enumerated using the sums of strata from the Waterfowl Breeding and Habitat survey. The 2019 total was 13,066 birds; 166% above the most recent 10-year (2010-2019) average of 4,908 birds. The population size of Vancouver Canada geese is unknown because current survey methods are not feasible for the forested habitat they occupy in southeast Alaska.

In Anchorage, the number of Canada geese nesting and residing over the summer increased by more than 10-fold during the 70s and 80s. This increase is a result of changes in the urban environment that initially attracted a few geese, then allowed for successful reproduction and high rates of survival. In the summer of 1998, the Anchorage goose population was estimated at more than 4,600, with growth rates as high as 14.6 percent per year since 1974. Following a collision between aircraft and a flock of geese in 1995, the Alaska Department of Fish and Game worked with partners to successfully reduce the high resident population of Canada geese in Anchorage. Since then, the urban goose population has stabilized at a much lower and safer level.

Canada geese are popular with wildlife watchers and are commonly harvested by waterfowl hunters across North America.

Migratory waterfowl (in Alaska) are managed by the U.S. Fish and Wildlife Service in partnership with U.S. state wildlife agencies.