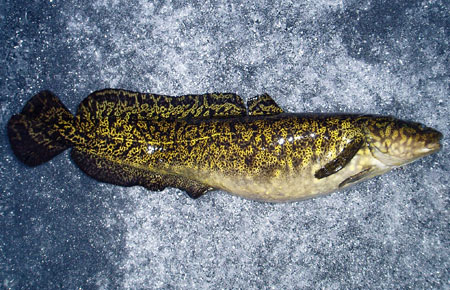 Burbot Lota lota are a rather unusual looking fish. They are not the most attractive fish and generally do not fight hard; however, they are popular with sport and subsistence users because of their table quality. They have a delicate white meat, a treat for Alaskans living away from the coast. Burbot have mottled skin that ranges in color from black to grey to olive and even yellow. They have elongated dorsal and anal fins that extend all the way to a rounded caudal fin and a distinct single soft barb on their lower jaw. Burbot appear to be scaleless but actually have small, almost microscopic scales. They are a relatively long-lived, slow growing fish and in Alaska, typically do not reach sexual maturity until age 6 or 7. A trait that sets them apart from other freshwater fish is that they spawn in mid to late winter.

Burbot are a relatively long-lived and slow-growing species. In Alaska, burbot older than 20 years are not uncommon. It typically takes burbot from five to seven years to reach 18 inches in length. This is also the length at which most Alaska burbot spawn for the first time. Burbot spawn under the ice in late winter (February to March) and have been observed to mill together forming a large writhing ball while spawning. Eggs are very small (about 1 mm in diameter), and a large burbot can produce over a million eggs. Burbot do not make nests to spawn, rather they just broadcast spawn in the water column letting the eggs and milt free fall to rest on the bottom.

Young burbot feed mainly on insects and other invertebrates. By the age of five or six, burbot begin to feed almost exclusively on fish. Adult burbot can appear sluggish, but they are voracious predators, feeding mostly at night. Once a burbot has captured a fish, it is reluctant to give it up. Its large mouth, strong jaw, and large number of inward slanting teeth account for the burbot’s efficiency as a predator. Whitefish, sculpins, lampreys, and other burbot are common food items. Burbot will also sometimes eat mice or shrews.

Burbot are distributed in fresh waters throughout North America, Europe and Asia with their range extending southward to about 40 degrees north latitude. They occupy most large clear and glacial rivers and many lakes throughout most of Alaska. However, burbot are absent from Southeast Alaska. Burbot are known by a number of different names including lawyer, loache, eel pout, methy, lush, lingcod, and mud shark. The largest sport fisheries occur for burbot in the Tanana River, and lakes in the upper Tanana, Upper Copper and Upper Susitna river drainages.

Robust populations of burbot exist in the glacial colored Kuskokwim, Yukon, Tanana and Copper rivers. Most lake populations are also healthy but some of the road accessible lakes in the interior have special restrictions due to concerns of overfishing. Since burbot are long lived and relatively late to mature, they are susceptible to overharvest. Many populations of burbot in the Glennallen area were overharvested in the 1970's and 1980's when set lines were allowed, but through proper management actions, most of the populations have recovered now and support healthy populations.

Sport fisheries occur throughout the natural range of burbot in Alaska. The largest fisheries occur in the Tanana River drainage and the lakes in the Upper Copper Upper Susitna area. Statewide harvest has been relatively modest compared to other species and has averaged about 5,600 fish the last ten years (2002-2011) with no apparent trend during that time period. These harvest numbers are down about 75% from the historical highs during the 1980’s before sound management practices were instituted.

Little is known of the burbot subsistence fisheries located throughout the state. Most burbot are likely incidentally caught by subsistence fisherman, but the practice of constructing wire mesh traps to capture migrating burbot during the winter is still used in some places of the state.

Sport and Subsistence fisheries exist for burbot in Alaska. Sport fisheries for burbot in Alaska are managed on an area wide scale, drainage wide scale, and occasionally a lake specific scale depending on the number of fisheries that exist in an area and their popularity amongst anglers. For most parts of the state, the limit is 15 burbot per day. In the more heavily fished areas like the upper Susitna drainage (i.e., the Tyone River system), drainage wide regulations are in effect to protect all populations (in this case a bag limit of 2 burbot) within a drainage. Sometimes within these areas, specific lakes have even more conservative regulations. For example, Lake Louise has a bag limit is one burbot. Please check the regulations for your specific area.

Like all species of fish in Alaska, catch and harvest of burbot is tracked through the ADF&G Sport Fish Division annual mail-out Statewide Harvest Survey. In places where subsistence harvest takes place, harvest is often times tracked by door to door household surveys.

Most research on burbot in Alaska revolves around sampling burbot with baited hoop traps (fyke traps) to estimate length composition and/or abundance. Rigorous studies were completed throughout the late 1980's extending into the early 2000's. Most of this research was centered around the Glennallen/Paxson area where overharvest likely took place in many lakes in the 1970's and 1980's. Research has been limited the last several years as current management strategies seem to be providing sustainable harvest rates.