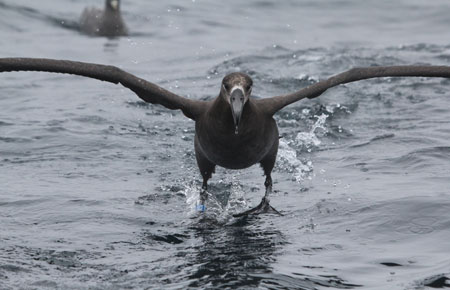 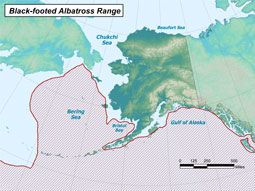 The black-footed albatross is a large seabird 30–33 inches in length with an average wingspan of just over 7 feet (range of 6-8 feet). It is dark brown to black in color with black legs, bill, and feet. Adults have white under the eyes, at the base of the bill, and base of the tail.

Eggs are laid in November-December. The average incubation period is 66 days. Chicks hatch in January and February. The chicks are brooded by their parents for several days and guarded for up to one month. After this time, the parents spend most of their time at sea, returning only to feed their chick. The chicks fledge in June-July. When the chicks are born, they are uniformly dark colored. They will gain the white coloration pattern of adults as they age. Once they reach sexual maturity, the young albatrosses usually return to their natal colony to breed.

The black-footed albatross is a surface feeder. It forages by surface-seizing, contact dipping, and scavenging. Its primary prey species include squid, fish, and other invertebrates.

Outside the breeding season, the black-footed albatross is an open ocean species. They are most commonly seen over shelf breaks and along boundaries between water masses. The black-footed albatross is most concentrated northeast of Japan to the US West Coast. Along the west coast, they are often associated with the California Current. Alaskan waters constitute the northern end of their range. In the summer they can be found in the Gulf of Alaska and along the Aleutian Islands.

Listed as threatened by the state of Hawaii.

In the late 1800s and early 1900s, black-footed albatrosses were almost wiped out by feather hunters. Later, rabbits were introduced to their breeding colonies and destroyed their nesting habitat. In the 1950s and 1960s, the birds were culled by the military to reduce the number of collisions with aircraft. The black-footed albatross was able to recover from each of these severe population declines. However, the population is currently experiencing a slight decline.

Around the turn of the century, the black-footed albatross was targeted by feather hunters.