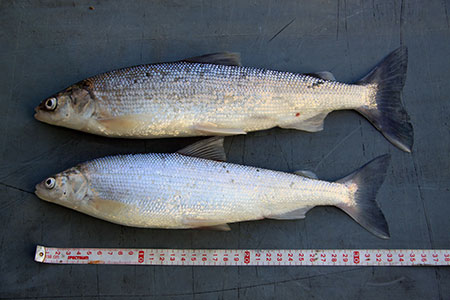 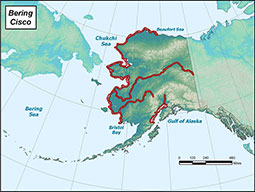 Bering ciscos are anadromous which means they spend part of their lives in the ocean and part of their lives in fresh water. Bering cisco are known to rear in coastal waters, estuaries, and river mouths until mature, when they migrate upstream to spawn. Sexually mature, adult Bering cisco, ranging in age from 4 - 12 years old, undertake extreme spawning migrations into freshwater systems, traveling over 500 miles up the Kuskokwim River and over 1,200 miles up the Yukon River. Depending on her size, a female Bering cisco may release up to 34,000 eggs. Some Bering cisco may not die after spawning. Whitefish eggs are negatively buoyant and non-adhesive. The female broadcasts her eggs over loosely compacted gravel beds in turbid and swiftly flowing water. The eggs presumably hatch in the spring and the young descend downstream to feed and rear in brackish estuarine habitat.

In Alaska, Bering cisco are found from the Kenai Peninsula (likely rearing fish from the Susitna River), north along the Bering Sea drainages, and east along the Arctic Coast to the Colville River. The only rivers where spawning runs have been documented are the Susitna, Kuskokwim, and Yukon Rivers.

Several studies have been conducted on Bering cisco populations by a number of agencies over the years. Research indicates that Susitna, Kuskokwim, and Yukon River populations are quite distinct. Such information is very useful when conducting mixed stock analysis on fish collections of unknown origin.

Overall strength of Bering cisco returns varies across the state by year and location. Currently there is not sufficient data to access the relative abundance of Bering cisco within or between known populations throughout the state.

Potential overharvest from commercial, personal use or subsistence fisheries is one threat to the resource. This species is essentially endemic to Alaska, which means they are prevalent in or peculiar to a particular location or region. The migratory behavior of Bering cisco makes the species susceptible to local habitat alteration, disturbance or degradation. Bering cisco tend to be slow-growing, late maturing, and are the shortest lived whitefish species (except perhaps the pygmy whitefish in some locations) which leaves them vulnerable to large-scale disasters. Other major ecological changes, such as those associated with the effects of global warming, could adversely affect Bering cisco populations.

The Bering cisco is known to be an important subsistence fish species for coastal and lower river communities located within drainages of the Yukon and Kuskokwim Rivers. A commercial fishery in the lower Yukon River estuary targeting Bering cisco has been ongoing since 2005. The fishery occurs annually between September and December and harvest cap allows for a combined harvest total of 20,000 pounds for all species of whitefish.

Numerous research projects have been conducted on Bering cisco throughout Alaska. The Alaska Department of Fish and Game, U.S. Fish and Wildlife Service, and University of Alaska have all studied Bering cisco in recent years. ADF&G projects include documentation of traditional ecological knowledge (TEK) and assessments of subsistence harvests for non-salmon species such as whitefish. A University of Alaska project aims to determine the stock composition of Bering cisco populations in the lower Yukon River by examining the strontium isotope composition of the fish’s otoliths (ear bones). U.S. Fish and Wildlife Service projects have sought to identify spawning habitats and spawning migration patterns in some reaches of the Yukon and Kuskokwim River drainages. Many of these projects use radio telemetry (biologists place radio transmitter tags into fish and then follow the signal in order to track the fish's movements). The information gathered is used to better manage and protect Bering cisco stocks and habitat.

There are a number of ways to get involved in the regulatory process for Bering cisco. Since the State of Alaska is responsible for managing Bering cisco fisheries throughout the state, you can participate by attending Alaska Board of Fisheries (BOF) meetings, local advisory committee meetings or writing proposals to the BOF.