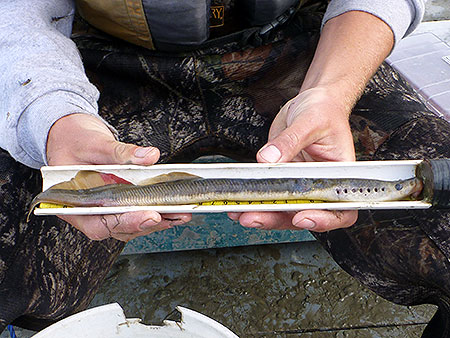 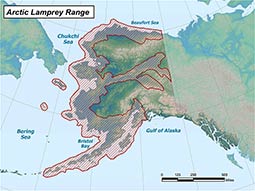 The Arctic lamprey is a small eel-like fish up to 15 inches in total length. Arctic lampreys are distinguished from other Alaska lampreys by two large teeth on the supraoral bar and the presence of a row of posterial teeth.

Arctic lampreys are anadromous, which means it spends part of its life in the ocean and part of its life in fresh water. Anadromous Arctic lampreys may spend months moving to the cool, clear headwaters of streams to make their nest or redds. Both males and females participate in redd building in stream riffles by removing small rocks with their mouths and fanning smaller particles with their tails. Males and females intertwine while simultaneously depositing sperm and eggs into the redd. Depending on her size, a single female can release up to 100,000 eggs. The adults die soon after egg fertilization. The eggs hatch in freshwater in 7 to 14 days depending on the water temperature. Larval forms of lampreys, referred to as ammocoetes, are born without eyes and lack sucking mouthparts. Lampreys remain at this stage for three to seven years before metamorphosing in adults, which includes the development of a sucking mouth, eyes, and teeth.

Ammocoetes burrow into the silt or mud of shallow pools and eddies of clear streams and feed by filtering microorganisms, algae, and detritus from the water. Anadromous adult lampreys parasitize other organisms such as other species of fish or even marine mammals by using their sucking mouthparts to attach themselves to the host's body. They then use their teeth to cut through the scales and skin to get to the host's blood and body fluid.

Parasitic adult lampreys migrate to the sea after metamorphosing into adults and tend to spend one to four years in the marine environment before returning to freshwater to eventually spawn. Anadromous lampreys return to fresh water in the fall and overwinter until spring when they spawn. Lampreys tend to migrate upstream in large groups and once upstream migration commences lampreys do not feed.

Population discreteness for Arctic lampreys within and among river systems in Alaska is unknown, as very little information exists on Arctic lampreys in general. It is clear that an understanding of Arctic lamprey genetic population structure is necessary to identify appropriate management units for maintenance of biodiversity and productivity.

Overall strength of Arctic lamprey returns varies across the state by year and location. Why run strength remains strong in some areas while weak in other areas is unclear.

In Alaska, anglers may dig through mud for juvenile Arctic lampreys to use for burbot bait, while harvest of adults occurs during subsistence fisheries. Arctic lampreys are captured using scoop nets or an eel rake, which consist of a long spruce pole with nails through the end so the sharp nail ends stick out like a rake. They are dried, smoked, or canned mostly for human consumption or dog food.

There is presently no ongoing department or federal research projects involving Arctic lamprey stocks in Alaska.

There are a number of ways to get involved in the regulatory process for Arctic lamprey. Since the State of Alaska is responsible for managing Arctic lamprey fisheries throughout the state, you can participate by attending Alaska Board of Fisheries (BOF) meetings, local advisory committee meetings or writing proposals to the BOF.