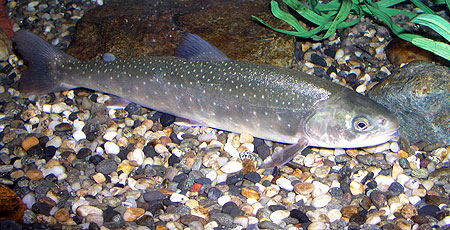 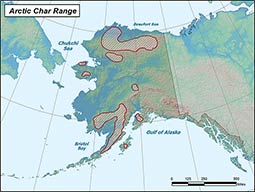 In northern Alaska, all known populations of arctic char spend their entire lives in lakes.

Char are generally distinguished from other salmonid fishes by having light spots on a dark background and by the lack of teeth on the shaft of the vomer (upper palate of the mouth). Arctic char are highly variable in color depending on environmental conditions within their lake of residence and time of year, but are generally brown to greenish-brown on their upper body and lighter on their lower body. They have sparse pink to red spots on their back and sides (15-20 below their lateral line) and typically, the leading edge of their lower fins are white. In spawning adults, especially males, the lower body and the lower fins are orange to red, with fins having a prominent white leading edge. Spawning colors are more exaggerated in males than in females.

Little is known about the life history of Arctic char in Alaska lakes. However, in other areas, char often exist in two different forms in the same lake. These forms are usually described as "dwarf' and "normal." The forms show differences in habitat and food selection, resulting in different growth rates, size at maturity, and average size. Growth is slow for Arctic char in Alaska's cold, often nutrient-poor lakes. Some arctic char have been known to live for over 20 years. Maximum size may vary greatly, depending on the productivity of the particular lake and the presence of other fish species. Fish over 10 pounds are not uncommon in some Alaska lakes, while other lakes may not produce fish over 2 pounds even though fish may reach great age. The largest Arctic char in Alaska probably occur in some of Bristol Bay's large lakes, where good fishing can be had from late May through early July when these fish congregate to feed on salmon smolts as they move toward the sea.

Spawning takes place in lakes between the fall months of August and October. Most char are ready to spawn between six to nine years and individuals usually spawn only every other year. Eggs are fertilized and deposited over jumbles of substrate or shoals of gravel. Spawning sites are also chosen based on water depth; thick ice can freeze to the bottom in shallower portions of lakes. In some lakes, pre-spawning char congregate near inlet streams or waterways connecting lakes, but they move back into the lake to spawn. Prior to spawning the female selects a location within the male's territory and begins to dig the spawning nest or redd. The male courts the female by circling around her. He then moves alongside her and quivers. The mating pair eject eggs and milt into the pit area and the fertilized eggs are deposited into the gravel. The fertilized eggs will hatch after 2 months, usually before the spring. Young arctic char begin to feed after emerging from the gravel.

Arctic char feed on a variety of different food items from zooplankton and insects to other fish (including smaller char) depending upon the specific water body, their age and relative size, as well as time of year.

Arctic char range across the northern polar regions and have been introduced into many European and North American Lakes.

Populations of Arctic char in Alaska are considered to be relatively stable throughout their range in Alaska due to their relative isolation (lakes only) and a very conservative management regime adopted by the Board of Fisheries that results in relatively low harvest rates.

Little is known about population trends for specific Arctic char populations in Alaska lakes due to relatively low harvest rates and limited research. It is assumed that populations are generally stable throughout its range in Alaska.

Potential threats to northern char populations include over-harvesting, habitat degradation/disruption, climate change, invasive species, and pollution among others. In Alaska, where Arctic Char occur only in lakes and where management regulations are fairly conservative, overharvesting is a relatively small concern at present. Given that large portions of Alaska’s Arctic char habitat remains intact and is relatively remote, perhaps the most urgent threat is climate change which is predicted to exacerbate existing stressors (ACIA 2005; Reist et al. 2006a). For example, rising temperatures may increase the level of contaminants, such as mercury, in Arctic freshwaters negatively affecting the health of the fish and the ecosystems they inhabit (ACIA 2005; Reist et al. 2006b).

Arctic char are important components of northern aquatic ecosystems and culturally significant to northern communities throughout the arctic and sub-arctic regions. They are an importance subsistence food in many northern countries and in some parts of Alaska, and they support a variety of sport and commercial fisheries, the largest being in Canada and Europe.

In western Alaska, Arctic char & Dolly Varden are known as “Yugyak” in Yupik cultures of western Alaska and as “Qakelay” to the Denaina cultures of Interior/southcentral Alaska. Where salmon are not abundant, Arctic char and Dolly Varden (along with other nonsalmon fish such as whitefish) replace salmon in local diets. In the Kotzebue area and Kuskokwim areas, subsistence fishing for Arctic char has few restrictions other than general statewide provisions (Fall et al. 2009, Fall et al. 1996)

Lake-dwelling Arctic char are slow-growing and can only sustain relatively low rates of exploitation. As a result, Arctic char are generally managed to provide a very conservative level of yield. In most areas of Alaska where present, the sport fishing daily bag limit for Arctic char is 2 per day, similar to lake trout, with the exception of the Kenai Peninsula and Kodiak island where bag limits are more liberal. ADF&G stocks a variety of landlocked lakes throughout southcentral and interior Alaska with sterile, hatchery-raised arctic char to provide additional sport fishing opportunities near larger population centers. For more information on stocked lakes containing arctic char see: Hatcheries stocking and releases. ADF&G also collects information on sport and subsistence uses of Arctic char, while the Alaska Board of Fisheries set regulations for sport and subsistence uses. The Federal Subsistence Board sets regulations for the subsistence use of Arctic char on federal lands in Alaska.

In northern and western Alaska subsistence fishing for Arctic char has few restrictions other than general statewide provisions (Fall et al. 2009, Fall et al. 1996). Similar to sport fishing, subsistence harvest regulations as well as harvest estimates for Arctic char are typically reported as a single category along with Dolly Varden char (Arctic char/Dolly Varden) due to the difficulty users have distinguishing between these species.

Harvest of Arctic char is monitored by the Alaska Department of Fish and Game via surveys of anglers as well as periodic community-based surveys among subsistence users. Annual sport catch, effort and harvest data is captured by the Division of Sport Fish through the Alaska Sport Fishing Harvest Survey. The USFWS, Office of Subsistence Management (OSM) also funds monitoring studies that may include Arctic char.

Relatively little research on life history or population trends of Arctic char in Alaska is currently being conducted by ADF&G at present, largely due to their isolated nature (generally, remote lakes) and relatively low fishing pressure on Arctic char stocks throughout their range.