Dall sheep have cloven hooves with rough foot pads for traction on rocky terrain. The tips tend to be more rounded and straighter than deer or elk. Their hooves have a boxier shape with straight sides.

The shape of Dall sheep droppings are similar to deer. The smooth, polished appearance and dark black or gray color distinguish sheep scat from other hoofed animals.

Dall sheep (Ovis dalli) are one of two species of all-white, hoofed large mammals found in Alaska. They are stocky, with amber horns, yellow eyes, and black noses and feet. Only in very few places in Alaska (i.e., Southcentral) does their geographic range overlap with that of the other all-white species, the mountain goat. However, sheep prefer drier habitats than those used by goats.

Like goat hunting, sheep hunting tends to be practiced primarily by a few, hardy individuals whose interest is more in the challenge and satisfaction of mountain hunting and the alpine experience than in getting food for the freezer. Dall sheep produce excellent meat but they are relatively small in size and the effort required to retrieve meat from the rugged alpine areas they inhabit can be daunting. Male sheep, or rams, usually weigh less than 300 lbs (136 kg), and females (ewes) weigh less than 150 lbs (68 kg). The dressed weight of a 230-lb sheep is about 140 lbs (64 kg), and a sheep that size will yield about 80 lbs (36 kg) of meat.

Recreational hunting is typically limited to the taking of mature rams during August and September. Nonresident sheep hunters are required to have a guide or be accompanied by relative who is an Alaska resident. Alaska’s Dall sheep are popular with nonresident hunters, and the harvest is split fairly evenly between residents and nonresidents. In 2007, for example, nonresidents took 403 sheep, while resident hunters took 513, or about 57 percent.

Rams are distinguished by their massive curling horns. Ewes have shorter, more slender, slightly curved horns. Rams resemble ewes in appearance until they are about 3 years old. After that, continued horn growth makes males easily recognizable. As rams mature, their horns form a circle when seen from the side. Ram horns reach half a circle in about two or three years, three-quarters of a circle in four to five years, and a full circle or "curl" in seven to eight years. In most cases, hunters are restricted to taking only full-curl rams.

Sheep have well-developed social systems. Adult rams live in bands which seldom associate with ewe groups except during the mating season in late November and early December. The horn clashing for which rams are so well known does not result from fights over possession of ewes. Instead, it is a means of establishing the social order. These clashes occur throughout the year (among females, as well) on an occasional basis.

Dall sheep inhabit the mountain ranges of Alaska. Dall sheep are found in relatively dry country and they frequent a special combination of open alpine ridges, meadows, and steep slopes with extremely rugged "escape terrain" in the immediate vicinity. They use the ridges, meadows, and steep slopes for feeding and resting. When danger approaches they flee to the rocks and crags to elude pursuers. They are generally high country animals but sometimes occur in rocky gorges below timberline in Alaska. They do not occur in the southeastern portion of the state.

The diets of Dall sheep vary seasonally from range to range. During summer, food is abundant, and the sheep consume a wide variety of plants. Their winter diet is much more limited and consists primarily of dry, frozen grass and sedge stems available when snow is blown off the winter ranges. Some populations eat significant amounts of lichen and moss during winter. Many Dall sheep populations visit mineral licks during the spring. 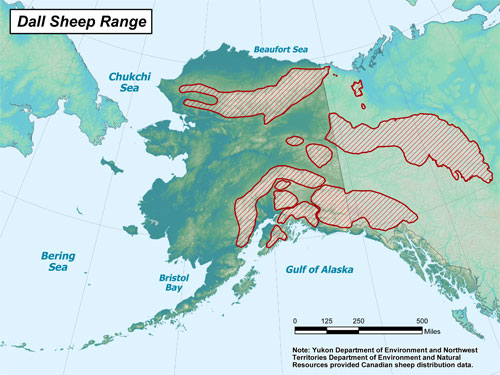