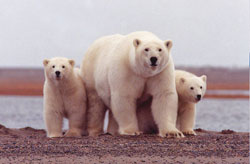 A powerful and patient predator on land, sea, and ice, the polar bear is the world’s largest carnivore and a unique symbol of the Arctic. Hundreds of thousands of years ago, Ursus maritimus, or the sea bear, evolved from its brown bear (Ursus arctos) ancestors to occupy an ecological niche in the frozen far north. Its white coat, made of water repellant hair on top of a dense undercoat, serves as camouflage and acts to reflect sunlight to the bears black skin. Its large paddle-like feet, with their fur covered pads, are well suited for swimming and for dispersing the weight of the bear when hunting on ice for ringed seal and other prey.

Though polar bears spend most of their lives on the sea ice, many gather during the ice-free period between August and October along the coast near Barter Island where the village of Kaktovik is located. The bears generally rest on barrier islands, but also venture near the village to feed on the remains of hunter-harvested bowhead whales.

Kaktovik is a small Inupiat village with a very limited number of hotel rooms, vehicle rentals, and few other visitor amenities. Access is by small commercial or chartered aircraft and weather-related delays are common. Most visitors come to view bears in September.

Barter Island lies within the Arctic National Wildlife Refuge (Refuge), a land unit of the U.S. Fish and Wildlife Service (USFWS). The USFWS Marine Mammals Management office, which manages polar bears in the United States, worked with the Refuge to develop a commercial guided polar bear viewing program that meets the requirements of the Marine Mammal Protection Act and the Endangered Species Act. The Refuge does not have jurisdiction over lands on which the bowhead remains are located; however, activities there must still conform to the Marine Mammal Protection Act and Endangered Species Act.

Visitors viewing polar bears near Kaktovik and on Refuge waters have increased exponentially since 2011. Now, bears and viewers gather around the village even as critical subsistence activities occur, increasing the potential for conflict. The Refuge is dedicated to providing quality polar bear viewing opportunities that minimize threats to public safety, potential disturbance to polar bears, and conflicts with local residents.

To ensure federal laws protecting polar bears are met, Kaktovik and the Refuge recommend viewing polar bears with a guide. Even with a guide, individuals must ensure their activities around polar bears are safe and lawful. Guides permitted to conduct polar bear viewing on the Refuge have shown proof that they meet all applicable federal and state regulations. Guides may have additional requirements set by municipal governments. Make sure your guide is operating legally and has a safety plan you can review.

Farther west on Alaska's northernmost tip, Utqiagvik also offers polar bear viewing possibilities, though the chances of seeing a bear are not assured. Check with local hotels for information about guided tours.

If you are visiting Utqiagvik and plan on leaving the city to view wildlife, whether polar bears, caribou, or birds, be advised that most of the surrounding lands are owned by the local Alaska Native Corporation, Ukpeagvik Iñupiat Corporation. Check with UIC before you leave to see if you will need to obtain a land use permit. Contact: UIC Land chief Delbert Rexford at (907)852-7462 or drexford@ukpik.com.

Polar bears are hunted for subsistence in Kaktovik, Utqiagvik, and throughout coastal Alaska by Native hunters. Harvest levels are managed through international agreements and treaties with cooperation by the local communities and the USFWS. The Marine Mammal Protection Act of 1972 and the ESA provide for the legal harvest of polar bears as well as other marine mammal species by Alaska Natives. Please be respectful and do not disturb any subsistence hunters encountered during your viewing activities.