Sport Fishing For King Salmon Restricted In The Haines/Skagway Area

The Alaska Department of Fish and Game, Division of Sport Fish announced today king salmon restrictions for the marine waters near Haines and Skagway. They are as follows:

Poor marine survival rates of Chilkat River king salmon in recent years warrant additional fishery restrictions to reduce harvest and increase escapement. At the Alaska Board of Fisheries January 2018 meeting in Sitka, the board adopted the Chilkat River and King Salmon River King Salmon Stock Status and Action Plan, which specifies how the department will manage fisheries to reduce harvest of these two wild king salmon stocks until the stocks recover. These actions are being taken as part of a regionwide effort to conserve Southeast Alaska wild king salmon and to comply with provisions of the Pacific Salmon Treaty. Management actions are being taken across all Southeast Alaska fisheries, including sport, commercial, personal use, and subsistence, to reduce harvest of wild king salmon. Anglers fishing south of the Haines/Skagway area should review the news releases announcing sport fishery restrictions for the Juneau, Petersburg/Wrangell and Ketchikan areas.

Regional king salmon bag, possession, and annual limits are scheduled to be released later this year after the Alaska all gear harvest limit of king salmon is announced in accordance with the Pacific Salmon Treaty. The regional king salmon regulations will not supersede these Haines area restrictions. 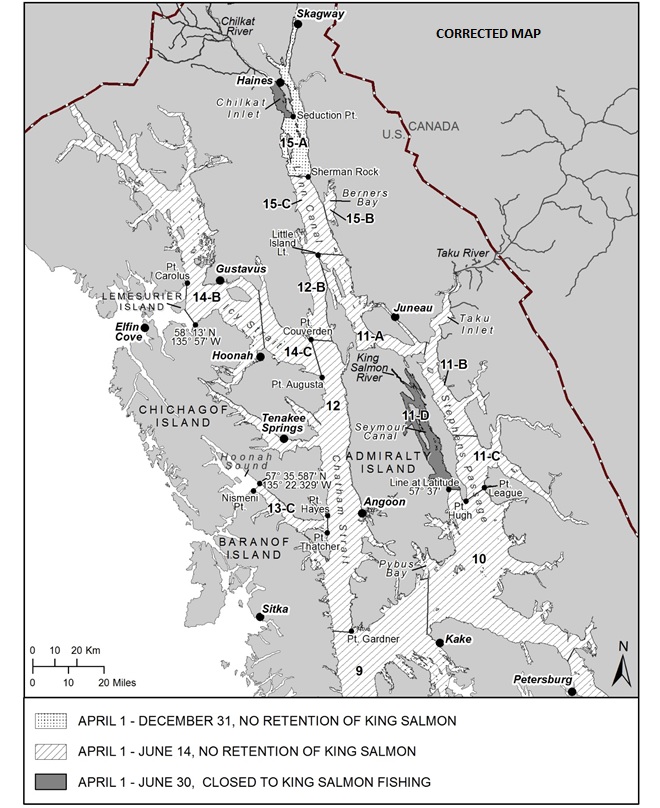